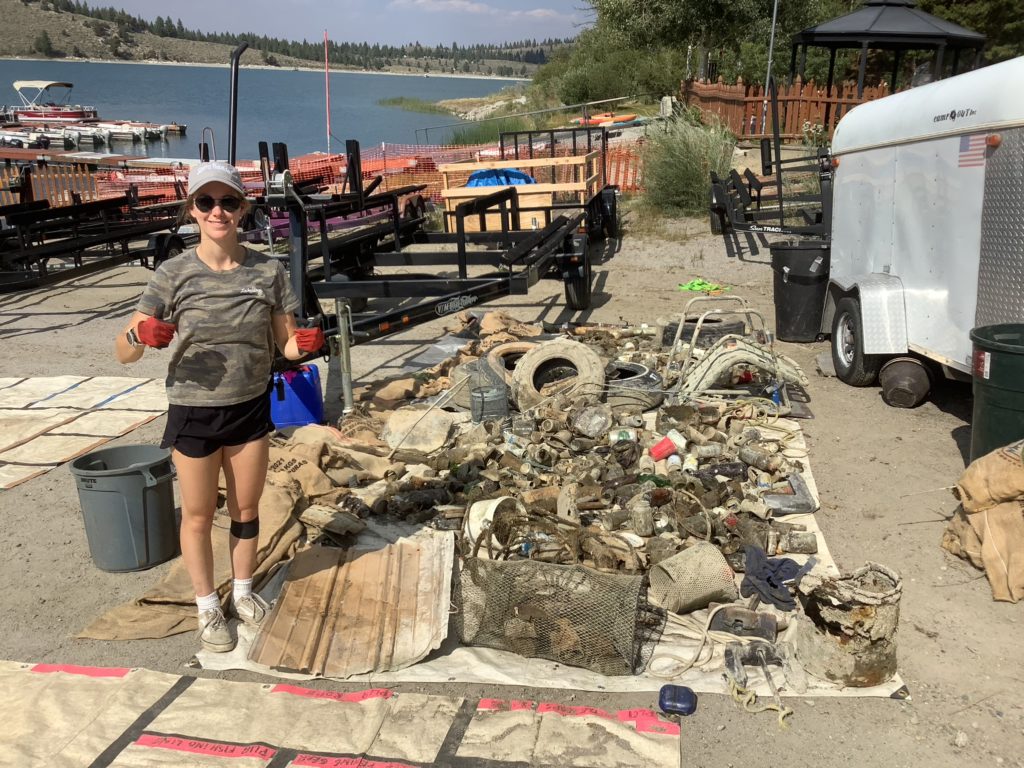 Mono County, CA (October 17, 2022) – The Clean Up The Lake (CUTL) dive team that completed the 72 mile SCUBA cleanup of Lake Tahoe in 2021-2022, has just finished months of work establishing strategic partnerships in the Mammoth Lakes region with government, nonprofits, businesses and Mammoth Lake Tourism, all leading to the organization solidifying a successful expansion into the Eastern Sierra. With these partnerships now in place, the team has just completed its first round of clean ups and research in the region.

Pilot research from 2021 indicated the need for a full cleanup in June Lake, so this September the nonprofit completed the lake’s first-ever, circumnavigated clean up. The result was more than anyone expected. Comparatively speaking to other lakes in the Sierra, over five times the amount of litter was discovered beneath the surface of June Lake. This litter included over 6,522 pieces that weighed over 3,404 lbs; shockingly the majority of the trash included 3,071 bait jars and over 1,100 aluminum beer and soda cans. The saddest part was that thousands of pieces of litter had to be left behind under the surface, marked as hot spots as the dive teams prepare to return for removal with more time in the near future.  “It was the ‘hottest’ hot spot our dive teams have seen yet,” said CUTL Founder & Executive Director Colin West.

The partnerships don’t end with June Lake. The CUTL dive team climbed over 9,000 feet and began conducting pilot research dives in four of the lakes in the Mammoth Lakes Basin including Lake George, Twin Lakes, Lake Mary and Lake Mamie. Pilot research in Lake George showed signs of typical, submerged litter while also being flagged for unusually concentrated amounts of fishing line, hooks, bobbers, lures, and more leading to wildlife entanglement. Multiple live trout were freed from the littered fishing line during the pilot dives. Each of these lakes showed its own unique signs of environmental issues that all warrant remediation and future protection.

“When I sat down with Colin to discuss what he was doing, the stewardship program immediately resonated with me and our Mammoth Lakes Tourism efforts to mitigate visitor impacts, but more importantly to educate our guests on ways to show more respect for our environment,” said MLT Executive Director, John Urdi. “The Clean Up The Lake program will not only have immediate environmental impacts on our pristine mountain lakes, but it will also show visitors, and locals alike, how impacted they are just below the surface by trash that is out of sight and therefore, out of mind.”

After cleaning four lakes in the last two years throughout the Sierra, removing over 53,000 pounds and 46,000 pieces of litter, and finding over 770 heavy lift litter items like boats, engine blocks and illegal moorings that are GPS tagged for future removal, Clean Up The Lake has come to a very unsettling conclusion. There is a widespread litter problem that has been ignored for decades in freshwater lakes all across the Sierra, and very likely, the world.

Through the continued removal of litter and the initiation of surveying for aquatic invasive species and algal blooms, CUTL hopes to engage the community, improve water quality, protect animal species both below and above the surface, and spread awareness to prevent this level of pollution from continuing. Clean Up The Lake will always continue to expand its research programs, partnerships, and environmental efforts to other waterways around the world. “I couldn’t be any more proud and excited to be expanding into Mammoth Lakes Basin this fall, with more to come in 2023,” said West.

About Mono County Partnerships: Clean Up The Lake was fortunate to have the support of not only the community, but also the government, nonprofits, businesses and more. Mammoth Lakes Tourism has committed to matching up to $25,000 in donations to clean up the local lakes. This is just one step the organization is taking to help #KeepMammothUnreal.  Mono County has also committed a grant, and  local nonprofit Mammoth Lakes Recreation is also donating, financially. The community of June Lake fully supported the clean up with June Lake Marina donating boats, Big Rock Resort donating the space to stage the daily operations, and Golden Pine RV Park and June Lake Villager Motel donating accommodations.

Amazing what brainless twit moron would throw trash into a crystal clear lake . I guess it just reinforces that we all knew many fisherman are drunken pigs . And the bait jars typically mea s they are chumming, nice bunch of caring individuals, can’t wait for the final cleanup… Read more »

P ite Not just the fishermen and women being slobs,as many of them are… Let’s say tourists in general. Most of the slobs I’ve witnessed are the groups of them that “recreate” up here,usually drunken parties,and the drunker they get,the closer they move near the lakes and streams..especially once the… Read more »