By News Staff on May 9, 2012 in Government Agencies/Utilities 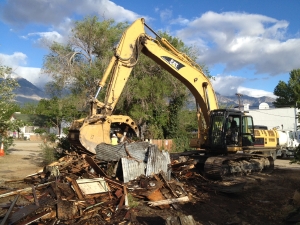 In late April, LADWP crews assembled before dawn and carried out demolition.

Inyo County has not yet stated whether the Los Angeles Department of Water and Power violated county rules by demolishing a building in Independence without a demolition permit.  However, the California Office of Historic Preservation has something to say about it.

Supervisor of the Local Government Unit of the Office of Historic Preservation, Lucinda Woodward, wrote to LADWP managers in Bishop to say that the demolished hair shop and the building next to it have been identified as historic along with three other properties in Independence.

Woodward writes that Inyo County’s California Environmental Quality Act procedures requires a discretionary review of demolition permits when the structure in question is more than 50 years old and may be of historical significance. The old barbershop is reportedly more than 100 years old. Woodward says that the Office of Historic Preservation spoke to DWP staff about these CEQA requirements in 2010.

Woodward says her Office is aware LADWP demolished the hair shop without a demolition permit.  She asks DWP to send copies of any environmental documentation prepared for the project.  The State Office is also concerned about remodeling of the Lions Clubhouse next door to the demolished hair shop and wants to offer ways to remodel an historic property.

We have emailed LADWP and await a response.

Karen-Why do you say Randy Keller gave them the okay?

Why don’t you ask Randy Keller, Inyo County Counsel who gave DWP the okay to demolish the building, of course he would never state that in public. By the way, The State Historic Preservation office should look at today’s SacBee. Brown is proposing a 10% cut to State employees, DWP… Read more »

I would bet if I did this I would have the full force of the law all over me. Hope DWP gets theirs soon.

fed up
Reply to  Trouble

Yea if you did that in Mono county you’d be sitting in the Bridgeport motel , and they’d forget about you. They would not even notice the smell.