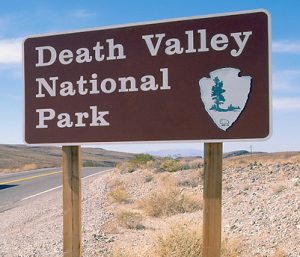 An Inyo County Sheriff Deputy and Death Valley Park Rangers responded to the Zabriskie Point Trailhead late that night to begin an investigation and search.  The officers searched until 2:00am but were unable to locate the victim.

The next morning, after further consultation with the reporting party, a team of Park Rangers and an Inyo County Sheriff Deputy located the victim.  He was approximately 45 yards off the Badlands Loop Trail and roughly a mile from the Zabriskie Point trailhead.  Additional Park Rangers hiked in with a wheeled litter to recover the victim and transfer him to the Inyo County Coroner.

The recorded high temperature on September 6th at Furnace Creek was 123 degrees Fahrenheit.  The cause of death is to be determined by the Inyo County Coroner’s Office, but extreme heat appeared to be a factor.

“Our hearts go out to the victim’s family at this time,” said Death Valley National Park Superintendent Mike Reynolds.  “We also thank the Inyo County Sheriff’s Office for their assistance and professionalism working under these extreme conditions.”

Park visitors should always closely monitor weather and their own health and limitations.  Even with temperatures significantly below 120 degrees, minor complications can quickly become dangerous in extreme heat.

I hope everyone takes the heat seriously. It’s so sad that this happened. My thoughts go to his family.