The Memorial Day Holiday saw major traffic in the Eastern Sierra and, tragically, two fatalities and other accidents.

Memorial Day does mark a time of high risk for highway accidents and sometimes death. On Monday in the June Lake area two cars collided. Both drivers died. The CHP said the driver from Long Beach collided head-on with the driver from British Columbia. 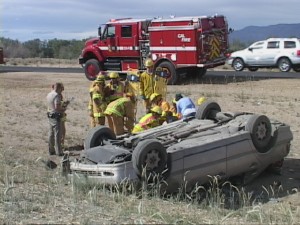 Meanwhile, later the same day, a couple from Upland, CA ended up in the meridian between the new four lanes north of Independence. The CHP said 50-year-old Jesusa Stover was at the wheel of a 1999 Mercedes which, for unknown reasons, veered to the left, off the highway. The vehicle overturned an undetermined number of times. Ms. Stover and 52-year-old William Stover were welling seatbelts and were not thrown out of the vehicle.

The couple did receive minor injuries. The Independence Volunteer Fire Department and ambulance crew responded. So did CalFire and the CHP. The accident did not start any fires. The man and woman were seen sitting at the accident scene while ambulance crew members worked to stabilized them.

The CHP continues to investigate that one.

Before the holiday, a local man was driving his pick-up truck up Chipmunk Canyon Road. For an unknown reason, he rolled his truck. He refused medical treatment and went on his way since there was no property damage and drinking was not

We work to provide daily news to all of the Eastern Sierra, in the tradition of Eastern Sierra News Service and the Sierra Wave. We bring you daily happenings, local politics, crime, government dealings and fun stuff. Please contact us.
View all posts by News Staff →
High Desert Academy Will Remain Open
Bishop Tribe Plans for Change