For almost two and a half years, residents of the Highlands Mobile Home Park in Bishop have worked to achieve an officially enforceable speed limit. Today they succeeded. 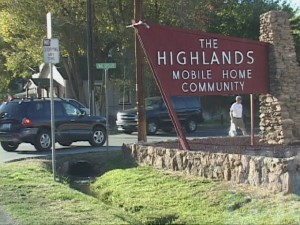 Dan Sanchez, who is with park management, said that he personally has worked as the point man for the past two years and four months to get this issue through. Sanchez said that in recent years, traffic through the park has grown faster and more dangerous. Even though the speed limit has always been 15 miles per hour, the limit now carries the force of law. 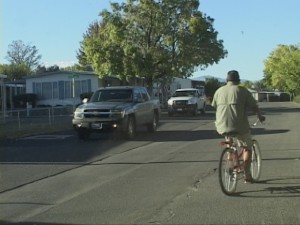 Mr. Sanchez pointed out that the design of the park does not accommodate sidewalks, so pedestrians must share the road with vehicles. He said of the more than 500 residents in the park, more than 300 are senior citizens. Several accidents have been recorded within the park.

We work to provide daily news to all of the Eastern Sierra, in the tradition of Eastern Sierra News Service and the Sierra Wave. We bring you daily happenings, local politics, crime, government dealings and fun stuff. Please contact us.
View all posts by News Staff →
Day Care Provider Will Appear in Court
“747 Looking” Plane Repeatedly Circled Southern Inyo