High winds whipped through the Eastern Sierra Tuesday leading to trouble on the highways, power outages, and damaged roofs throughout the Alabama Hills. 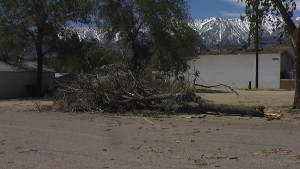 The high winds led to a power outage in Lone Pine and big rigs blown off the highway, but it was the homes in the Alabama Hills that appear to have been hit hardest. The Inyo Sheriff’s Office said that high winds tore down trees that hit power lines, causing much of the town to go dark.

Forecaster Dennis Mattinson lives in the Alabama Hills. He reports gusts over 60 miles per hour with sustained winds of 42-45 miles per hour. Some houses with tile roofs faired relatively well, but Mattinson says that nearly every home in the Alabama Hills with shingle roofs sustained at least some damage. On at least one home, the metal roof was severely damaged, with sheets of twisted metal ending up in the yard.

At one point Mattinson says that he went out to get his mail, only to see a neighbors mail box bouncing down the street. 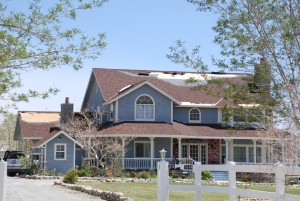 High winds are not unusual in the Eastern Sierra, but Mattinson says the winds on Tuesday were what are known as down slope winds. This type of wind occurs when air moving across a mountain range like the Sierra runs into a stable layer in the atmosphere on the leeward side of the mountain range. As the wind hits the stable layer near the mountains, it is compressed and forced down the mountain slope picking up speed. If the stable air is not there on lee side of the mountains the wind simply passes over leading to high winds up high, but not in the valley.

These down slope winds pick up speed and can lead to 50-60 mile per hour winds in the Eastern Sierra, according to Mattinson.

The wild weather is expected to mellow and warm up for the weekend.

We work to provide daily news to all of the Eastern Sierra, in the tradition of Eastern Sierra News Service and the Sierra Wave. We bring you daily happenings, local politics, crime, government dealings and fun stuff. Please contact us.
View all posts by News Staff →
Henderson Sentenced for Embezzlement
Sheriff Candidate Doug Northington Speaks Up