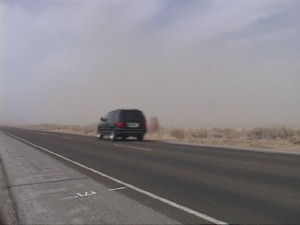 The CHP said that high winds and blowing dust had caused them to close northbound lanes of Highway 395 and escort traffic through.

Some close to the scene said that it appeared the highway widening project provided a lot of the blowing dust that caused visibility problems. That area had blown up big dust clouds last week-end. The highway was never closed but visibility became an issue.

The burned area north of Independence also put up a lot of dust.

Gusts of wind had gone up as high as 60 mph at times. In the midst of the wind and dust, a big wreck had wrecked. No one was hurt but the clean-up caused further highway problems.

We work to provide daily news to all of the Eastern Sierra, in the tradition of Eastern Sierra News Service and the Sierra Wave. We bring you daily happenings, local politics, crime, government dealings and fun stuff. Please contact us.
View all posts by News Staff →
Mono Parolee Arrested in Bishop on Six Felonies
Bureaucrat Beat: Tales of Fish Abuse, Mortgage Scam? and Bureaucratic Nausea