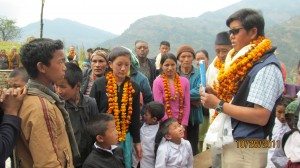 Wangdowa Sherpa (right) with students and others in his Nepali village during a trip with Eastern Sierra residents.

In a small village in Nepal, children eagerly go to school where there is little furniture and few books.  One man from that Village did leave years ago to pursue a higher education, his own business and now life in Mammoth Lakes and the Eastern Sierra.  Wangdowa Sherpa remembers the modest means of his village and now works to raise funds for land and a new school in his home village.

Wangdowa will speak and present a slide show, along with a group of local friends, on their recent trek in the Nepali Himalaya.  This group took about 70 pounds of school supplies and books and saw the two-room school with no lighting or heat, dirt floors and benches.  The sight has inspired some of our own residents to help.

Wangdowa explained that from the time he was 14 he guided tours in Himalaya. He later traveled to the Bay Area to study. Then he formed an ecotourism company and worked as a concessionaire for the Sierra Club in Thailand and other places.  He met and later married Deanna Dulen, who is Superintendent of Devils Postpile.  They now live in Mammoth which is very similar in elevation to his village in Nepal.  Wangdowa said improvements will mean a great deal to the 75 students in his village.