The Golden Eagle waits impatiently for the carrier door to open. To the west, a wind-swept sky forms a deep blue backdrop behind the mountains and the early spring sun floats warm and big overhead. 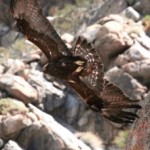 Golden Eagle soaring, from below. Photos courtesy of Peggy Hankins

Two months earlier, Inyo residents Steve Toomey and Glenn Clark observed this same Eagle on old County Road standing on a roadside boulder. The large raptor did not fly off when their vehicle passed closely and noting this lack of response, they stopped. The Golden Eagle jumped from the granite to the desert floor and began to run. Something was wrong!

Glenn and Steve drove to the nearby Big Pine Animal Shelter and told their story to staffers Julie Richardson and Katie Bird who followed them to the site, located the bird, and set the two men on watch, and drove to Eastern Sierra Wildlife Care’s Center at Keough’s. Cindy Kamler and Kelly Bahr quickly assembled an eagle-size carrier, thick gloves and nets and headed south down the old road. 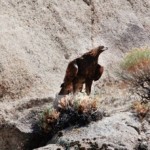 Glenn and Steve knew just where the Eagle was and Assistant Director Kelly Bahr soon reached the weakened Eagle and secured his powerful legs and talons. Kamler assisted her in getting a safe hold on the bird and he was soon in the carrier and off to ESWC where he was given a physical exam; fluids were administered to combat dehydration. He was badly underweight but no injuries were found.

On a follow-up at Bishop Veterinary Hospital, Dr. Janice Pfeiff and her assistants X-rayed the ailing bird of prey. A healed—or nearly healed—fracture of the humerus was seen but needed no treatment.

Back at the ESWC hospital, the mature male Eagle was gradually introduced to solid foods and placed in the only cage large enough for him to spread his wings fully. He soon was flying the much-too-short space end to end and it was arranged to transfer him to WildCare in Marin County where he could work out in their 100-foot flight cage. ESWC volunteer Roberta Noel drove the bird to San Rafael and transferred him to their care. 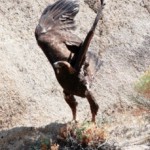 Golden Eagle prepares to lift off.

After his first flight, WildCare Assistant Director Cindy Dicke called ESWC to report that he had easily and eagerly flown over 80 feet in his first attempt—and would have gone farther if he hadn’t run into the end of the cage!

Ten days later, ESWC volunteer Peggy Hankins transported the fully recovered Golden Eagle back to ESWC and his original cage where he could recover from nearly 8 hours in a carrier and adjust to the elevation change.

Now, two months after his rescue, on a high-wind, gusty day, the carrier door is opened and he bursts out in a long, low flight toward a rocky outcrop where he lands smoothly and examines his surroundings. He is only a few hundred yards from where he was found and rescued. 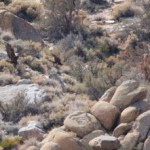 A handful of ESWC staff and volunteers watch as he works his way up and over the outcrop and disappears into the gully behind. Kelly Bahr runs down and sights the eagle working his way upward toward the end of the outcrop. Onlookers gasp as he emerges into the open, flying strongly, swooping and soaring in the wind.

Smiles and cheers break out as we watch; then, further excitement: “There’s a second eagle!!” Yes, the male Eagle’s mate has shown up! The two magnificent birds are flying together across the face of the mountain. A raven tries to break up the fun (probably has a nest in the area) and the female chases it away.

Now begins a series of flights: one Eagle remains on the ground while the other flies upward in a aerobatic courtship display, dancing in the wind, then returns to the ground while the second Eagle rises and performs its own dance. The couple alternates several times as the onlookers watch through binoculars, camera lens or naked eye as the reunited mates renew their bonds and prepare for a long-delayed mating in the near future.

In a finale that brings smiles to our faces, the happy couple stand together wing to wing, then exit stage right behind a large boulder.

Fine story. But why was the bird in trouble initially?