By News Staff on July 2, 2013 in Government Agencies/Utilities 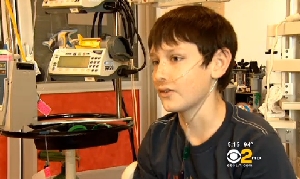 He made his home in Mammoth Lakes, loves music and the outdoors. In mid-May, 13-year-old Evan Podsiad was diagnosed with a rare heart condition. Suddenly his life changed, and he now awaits a heart transplant. The Mammoth Jazz Jubilee is the scheduled site for a benefit fundraiser for Evan and his family, who have all now moved to Los Angeles awaiting the transplant.

In an interview on CBS in Los Angeles, Evan appeared upbeat and eager for a new heart while he is confined in Children’s Hospital in Los Angeles. The only known therapy for his advanced heart failure is a transplant. Friends said doctors believe Evan’s life in high altitude brought his heart condition to their attention earlier.

While in the sixth grade in Mammoth Lakes, Evan was one of eleven boys in the Advanced Jazz Band. He was set on attending the Mammoth Lakes Jazz Jubilee Jazz Camp this summer. That is out of the question, but now The Beat Goes On for Evan Benefit Fundraiser will be held at the Holler Site of the Jazz Jubilee on July 13th.

The event will include raffle prizes, food, auction items, entertainment and community support. All proceeds will go to Evan and his family to help with the large financial burden of his heart transplant.

Donations were still needed in the form of benefit beverages, catering, raffle items auction items and monetary contributions. Donations can be sent to the Evan Posiad Fund at Eastern Sierra Bank. Call Team Evan at 707-498-8023.