By News Staff on January 19, 2012 in Government Agencies/Utilities 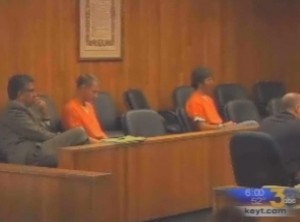 Thursday morning, the court in Santa Barbara County vacated the preliminary hearing later this month for Dr. Andrew Bourne and Joe Walker of Mammoth Lakes.  A new court date was set.  The Judge also ordered the defendants not to communicate with each other.

Bourne and Walker both face charges of communicating with a minor girl for purposes of sex.  Police said they recovered over 1,000 emails from the two men to a Santa Barbara 14-year-old.  Walker is additionally charged with committing a lewd act with a minor.  Both men have entered pleas of not guilty and they are both out of jail on $750,000 bail each.

Thursday, Santa Barbara Deputy District Attorney Mary Barron told Sierra Wave that the preliminary hearing for both Bourne and Walker that was set for January 25th was vacated. She said a new preliminary hearing setting has been scheduled for February 10th.  Santa Barbara news media also reported that Judge George Eskin ordered Bourne and Walker not to communicate with each other except in the presence of their attorneys.

Asked if the Santa Barbara DA had filed additional charges against the two men as earlier predicted, Barron said, “The complaint has not yet been amended as the case is still under investigation.”

In the Mammoth Lakes community, Dr. Bourne resigned from his seat on the Mammoth School Board.  A statement from Mammoth Hospital said that Dr. Bourne was on an approved leave-of-absence from the medical staff and that the hospital terminated his contract with that institution where he functioned as a surgeon.

Walker has been described as a ski instructor at Mammoth Mountain.  He is the son of Sam Walker, founder of Whiskey Creek and long time community supporter.  Joe Walker and his brother founded The Looney Bean.