A head on accident on 395 ended in tragedy for a 39 year old man from Bakersfield. At about 9:00 Sunday morning, Highway Patrol Officers report that Richard Galvan of Lamont was driving a blue Chevy Colorado pick-up north bound on 395, a half mile south of the Division Creek Rest Area near Independence. 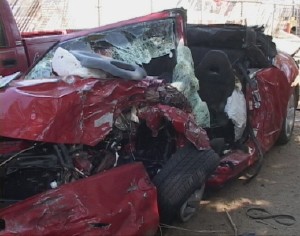 Officers say for an unknown reason, the driver of the blue truck drifted into the opposing southbound lane on 395. The pick- up hit an oncoming Mitsubishi Eclipse head on. The Chevy pick up was heavily damaged. The driver, Galvan, suffered moderate injuries. A thirteen year old female and a 10 year old male, passengers in the Chevy, suffered minor injuries.

The red Mitsubishi Eclipse was badly mangled in the head-on with the pick-up. The driver, 39 year old Jaime Moreno Quezada of Bakersfield was killed in the violent collision. 20 year old Oscar Lujano of Lee Vinning suffered moderate injuries, according to CHP.

A 17 year old male, also of Bakersfield, suffered major injuries and was airlifted to Reno.

We work to provide daily news to all of the Eastern Sierra, in the tradition of Eastern Sierra News Service and the Sierra Wave. We bring you daily happenings, local politics, crime, government dealings and fun stuff. Please contact us.
View all posts by News Staff →
Broncos run over by Truckee
Volunteers Smother an Attic Fire on Tu Su