By News Staff on December 10, 2012 in Government Agencies/Utilities 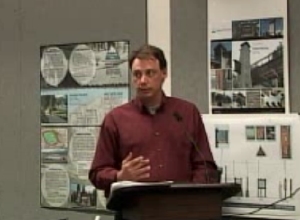 People in Mammoth Lakes still fret over the major budget cuts in Town government, and some of those cuts are less obvious than the lack of police. At last week’s Town Council meeting, Jesse Baldwin, who heads up the Mammoth Lakes Contractors Association, stood up to say that Town cuts make a real and tangible difference to contractors. He was worried about the Town not filling a permit technician position.

Baldwin told how he had tried to get a permit to install a ceiling fan. He said the woman at the desk didn’t know how long it would take and didn’t seem to know what she was doing. That was November 21st. He made repeated visits that took up to an hour and a half. Still no permit.

Finally, Baldwin told the Council, 14 days later, he got the permit. Baldwin had two points. First, contractors need faster action and more certain action on permits than his experience. Second, if there are time consuming delays, unlicensed and unpermitted work will increase and that can mean trouble.

Baldwin said in one past case someone tried to install a circuit breaker without following the rules and it started a fire. Baldwin said, “If there’s not a go-to person, this is what will happen.”

Mayor Matthew Lehaman said this would not be acceptable. He asked Baldwin and the contractors to wait two weeks to see if the Town could resolve this problem.

The problem isn’t a lack of government inspectors. It’s a system that requires government permission to install a ceiling fan in the first place. Using the odd accident as a pretext for expanding overly intrusive government supervision is what has rendered California insolvent and the United States the Brokest Nation… Read more »