By News Staff on August 30, 2013 in Government Agencies/Utilities 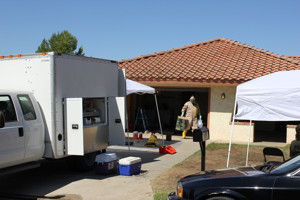 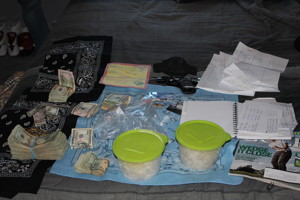 Agents from the Inyo Narcotics Enforcement Team (INET) and U.S. Forest Service (USFS) served multiple search warrants in Southern California as part of their investigation into marijuana cultivation sites in Inyo County.  INET and USFS Agents had been investigating the residences for several months, connecting the occupants of the residences to illegal activity and marijuana cultivation sites on federal lands in Inyo County.  INET and USFS were assisted in the warrant services by Agents of the U.S. Drug Enforcement Agency (DEA) and Agents from the local law enforcement jurisdiction.  Teams of Agents were created and assigned specific houses in order to coordinate the warrant services at the exact same time.

Throughout the month’s long investigation, INET and USFS Agents paid close attention to a third residence with the most traffic that was connected to the activity in Inyo County.  A search of that residence 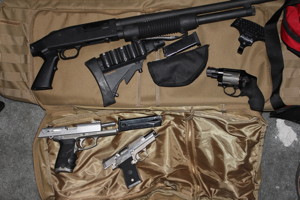 resulted in the discovery of a methamphetamine lab.  In that residence, INET Agents seized over eleven thousand dollars in cash, over five firearms (one of which was loaded and stolen), several vials of steroids, over two pounds of marijuana, over two pounds of crystal methamphetamine, and about 15 pounds of liquid methamphetamine.  Three suspects who were present inside the residence at the time of the warrant service were arrested.  The residence also required the response of a hazmat team specializing in the cleanup and processing of meth labs and the response of social services counselors specializing in drug endangered children cases.  All of the suspects arrested and evidence seized was handed over to Agents with the local law enforcement jurisdiction for local prosecution.

We work to provide daily news to all of the Eastern Sierra, in the tradition of Eastern Sierra News Service and the Sierra Wave. We bring you daily happenings, local politics, crime, government dealings and fun stuff. Please contact us.
View all posts by News Staff →
Letter to the editor: concerns about town manaager
Inyo deputy makes marijuana arrest
6 Comments
Newest
Oldest Most Voted
Inline Feedbacks
View all comments

And I don’t understand why they show the guns as if guns are harder to find then drugs, I mean in most states you can by a gun without picture ID but you sure can’t vote without one? Americas Priorities?

Mark
Reply to  The Aggressive Progressive!

I think they show them because they always find guns when they find drugs and money.

Let’s keep in minds cops make a killing by enforcing this war against drugs, they get federal grants so they can go out and target, arrest and prosecute non-violent drug user’s, also can’t forget the property they keep they profit from as well, The point I am trying to make… Read more »

Enoughalready, re read the opening sentences of the article. “Agents from the Inyo Narcotics Enforcement Team (INET) and U.S. Forest Service (USFS) served multiple search warrants in Southern California as part of their investigation into marijuana cultivation sites in Inyo County. INET and USFS Agents had been investigating the residences… Read more »

Where? Where is the connection? So Cal? Thats kind of like saying “Sierra arrests connected with some other part of the world” What is the story?

Read the story. It’s there.
BK