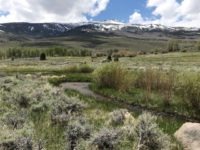 BRIDGEPORT, Calif.— Today, the Humboldt-Toiyabe National Forest announced its draft decision not to authorize cattle grazing on scenic and biodiverse public lands in the Eastern Sierra. The Forest Service had been reviewing whether to initiate cattle grazing on inactive sheep grazing allotments of approximately 16,500 acres where domestic sheep grazing was discontinued to protect Sierra Nevada bighorn sheep from disease. The four allotments have been free of all livestock grazing for 10 years allowing these rare high-elevation habitats to recover.

The Bridgeport Southwest Grazing Project would have authorized cattle grazing within portions of four allotments centering around the Virginia Lakes region, and partly within the Hoover Wilderness Area, designated by Congress in 1964. Instead, the Forest released a statement today indicating that Acting District Ranger David Risley is proposing to select the “No Action Alternative,” which does not authorize conversion of the livestock type for the four allotments, does not authorize livestock grazing, and does not authorize the reconstruction of water sources.

“I am very pleased that the Forest Service made the best decision for sage-grouse, bighorn sheep, and the many other rare species that call this Eastern Sierra landscape home,” said Laura Cunningham, California director at Western Watersheds Project. “The breathtaking scenery here deserves better than to be used for commercial livestock production.”

“This area provides habitat to many imperiled species, including the iconic Sierra Nevada bighorn sheep and bi-state greater sage grouse,” said Lisa Belenky, a senior attorney at the Center for Biological Diversity. “This is the right move by the Forest Service, it will allow habitat recovery to continue, protect rare riparian areas and cultural values.”

Part of the prior proposed decision entailed the reconstruction of three livestock watering sources within areas that contain important leks —courtship display grounds used by the declining Bi-State Distinct Population Segment of greater sage-grouse – and sensitive riparian habitats. Because nearly all populations of this sagebrush-dependent bird are in steep decline, in September 2020, conservation groups challenged the US Fish and Wildlife Service listing withdrawal for the Bi-state sage-grouse under the Endangered Species

See the draft Decision at https://www.fs.usda.gov/project/?project=49993

How ’bout all those sheep violating their grazing permits in multiple ways in the West Waker Basin? The sheep who used to graze the allotments spoken of in this article are now decimating a different area. Any of you have any idea what is is like to have 900 head… Read more »

Oh and by the way, he just took away Doc and Al’s lease permit!!!! They have been operating for over 50 years at Robinson Creek in Bridgeport. What did they do so wrong???

So you’re saying Doc and Al’s Resort land is being taken back and shut down ?
What does that have to do with Cattle grazing on public land ?
Source ?

It’s the same man – David Risley….government out of control…

So you’re saying one man,a forest ranger, can make the decisions on Doc and Al’s being shut down AND ending the grazing in and around Bridgeport ?

It is very connected….but I just remembered, you don’t live around here, so you wouldn’t know…we will keep out of your backyard, if stay out of ours. We do a great job in this valley taking care of our resources. We have been doing it for over 100 years, we… Read more »

What exactly would you do if someone failed paid their bill? But yeah – I’ve NEVER known the fine people of B-port to let the truth get in the way of an ad hominem smear campaign.

I just threw up in my mouth…..a bunch of people who don’t even live here and have no idea…. Go take care of your own backyard…

Go David Risley! Thank you! An excellent, evidence-based decision, which goes a long way in off-setting the USDA FS reputation as a “multiple abuse” agency.

Made my day outstanding