By News Staff on September 8, 2011 in Government Agencies/Utilities

Monday morning the phone rang at Eastern Sierra Wildlife Care’s Center where they care for injured and orphaned wild birds and mammals. Most calls are emergencies: a baby robin has fallen from its nest, a red-tailed hawk is hurt on 395 or a baby raccoon is trapped in a culvert. Kelly Picker’s call from Von’s, where she works as a clerk, had an unusual twist. 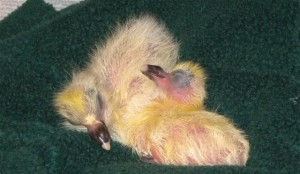 Some months earlier, a hatch in the ceiling over the outside coffee/eating area in front of the store had fallen open. The local pigeon flock (wild but not native) began using the space for a night roost—and raising babies. Sunday night a worker at Von’s closed the hatch, unknowingly trapping a number of birds inside. On arriving for work, the closed hatch caught Kelly’s attention;, she could hear the birds moving and calling inside. She immediately reported the problem to Manager Jason Yates and, with his approval, called ESWC.

Staff member Jeremy Dixon headed to Von’s to check out the situation. He called Director Cindy Kamler and confirmed that an unknown number of pigeons trapped, probably some were babies. Jason would provide the store’s long ladder if ESWC would attempt a rescue and release. Cindy, accompanied by volunteer Jim Varnum, drove to Von’s where the three put together a plan.

Armed with a hammer, Jeremy headed up the 20-foot ladder, held steady by Jim. He freed the hatch and let it hang open. Inside a number of pigeons were perched on a aluminum duct, eyes adjusting to the sudden intrusion of daylight. Motionless, Jeremy waited patiently but the birds did not move. He climbed up into the space where, by flashlight, he counted seven birds now flying around in confusion. Finding a nest with two tiny, yellow-fuzzed babies, he handed them down to Cindy who placed them safely in a snug warm container.

Still, none of the adult birds would leave. New plan: Jim and Jeremy would wait out of sight near the bottom of the ladder near a pile of birdseed. If the birds came down to the seed, they would scare them away from the area. Suddenly, four pigeons burst out of the opening and into the skies above the parking lot. A little later, two more fled the scene. Jeremy went back up and in to find an older baby, nudged him, and he fluttered to the ground. Jim picked him up and placed him in a box for transport to ESWC. The youngster wasn’t old enough to fly and take care of himself.

One adult remained. Frightened and disoriented, the pigeon kept flying away from the opening into the dark reaches beyond. There was no way to get the bird out while preventing the others from returning. Rescue efforts were suspended.

Everyone was glad that nine birds were saved, including the three babies being cared for at ESWC, but thoughts of one bird dying in the hot darkness couldn’t be forgotten. When Kelly called Tuesday morning, saying that Store Manager Jason had given the okay for one more try, everyone was relieved.

This time, ESWC intern Chris Morrison accompanied Jeremy, who repeated his actions of the previous morning. Climbing into the stuffy black chamber, he spotted the bird right away. Foolishly, it kept retreating from the exit. Jeremy turned off the flashlight, and in near dark inched his way through the hazardous space. Unable to fly in the dimness, the pigeon sat quietly. Jeremy grabbed her, moved carefully back to the hatch, opened his hands, and the bird flew swiftly away.

Thanks to a compassionate pigeon watcher, a sympathetic store manager, the courage of a young man, and ESWC, ten birds were saved from an unpleasant and lethal fate.