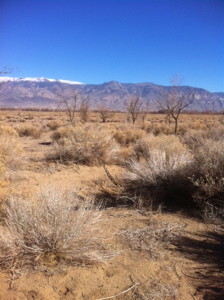 Seventeen years after Inyo County and the Department of Water and Power signed the Long Term Water Agreement, DWP has not completed many mitigation projects listed in a 1991 Environmental Impact Report and designed to make up for widespread damage done by groundwater pumps and abandoned agricultural fields to supply water to the second aqueduct.

The issue of mitigation came up recently in light of the incomplete Lone Pine High School farm project, which is a mitigation measure. In the Inyo Water Department’s Annual Report last year, a number of projects are incomplete or questionable.

The Laws area was severely damaged by pumping in the 80s. One mitigation measure there, a native pasture southeast of Laws, is not fully irrigated. The report says grasses are “mainly limited to ditches.” DWP had some kind of water accounting problem there. The McNally Ponds and pasture also limp along. DWP supplies water to the ponds only when water is diverted from the Owens River to the McNally canals. Last run-off year neither the ponds nor pastures received any water. 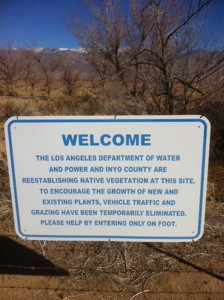 The Water Department Report points out that the Laws area “has lost all or part of its vegetation cover due to increased pumping and abandonment of irrigated agriculture.” Another mitigation measure would revegetate 640 acres near Laws. That’s nowhere because the Inyo-LA Standing Committee has not “evaluated the need for mitigation of this area.” The Five Bridges project is in progress but not complete. Another revegetation project near Laws on 160 acres is incomplete. So is a project at Laws Museum pastures. The Laws area mitigation overall is incomplete.

The so-called Bishop Revegetation project at the south entrance to Bishop looks like a very large, dried up area. A sign declaring the area a revegetation project was hung on a fence many years ago. The land behind the fence still looks dead. The Water Department Report says there has been little to no change. DWP did a little work on vegetation test plots and did some planting. A survey of the parcel in 2012 shows DWP had “attained a 4.8% native perennial cover.”

There are many other similar stories south of Bishop. We’ll have more on that later.

DWP was expected to make an issue out of water supply and use on Enhancement/ Mitigation projects at the Inyo-LA Standing Committee meeting Friday in Independence at the Board Room at 1pm.