By News Staff on May 24, 2012 in Government Agencies/Utilities 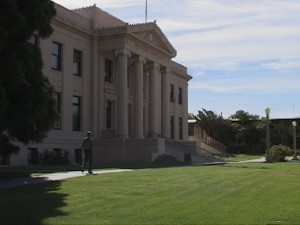 Inyo County maintains that it is a bad day at Black Rock – that’s the area near Black Rock Fish Hatchery where Inyo says the Los Angeles Department of Water and Power has done significant damage to plants through too much groundwater pumping.  Inyo has initiated a formal dispute under the Long Term Water Agreement.

Inyo County Counsel Randy Keller said that LADWP has had Inyo’s report on Black Rock for a year and a half and failed to respond.  So, Inyo started a formal dispute.  At a recent Inyo-LA Technical Group meeting, DWP refused to vote on the matter.  The issue will continue to go before the Technical Group and likely the Standing Committee in August.

Keller said LA has been “dragging its feet.”  Inyo would like to see something in writing from LA on its position.  Keller said that Inyo “needs to enforce the Agreement through its procedures.”  Dispute resolution is one of those processes.

It was actually twelve years ago when the Inyo County Water Department first began to report that groundwater pumping in the area south of Black Rock Fish Hatchery had drawn down the water table and killed plants.  LA has never responded to repeated concerns.  DWP did say that a measurable change in vegetation had to be verified and then a determination of the cause.  After that LA said officials would have to find significant damage and how to mitigate it.  Last April, Inyo Water Director Bob Harrington had said, “It’s a big challenge to get DWP to recognize an impact.”

Nothing to see here folks, move along. We have been pumping for decades and no one has died yet!

You are fortunate that we allow you to play on our water.

LADWP forgets who they work for. They’re not the Elite, they live in D.C.

I believe the people of Inyo need to file a class action lawsuit concerning our health and property values.

Sure seems funny .. that the ICS’s (Inyo County Supervisors) don’t get too aggressive, such as this article states … it seems to be a wait and see what LADWP does or doesn’t do .. dragging their feet.

ohhh should we be more forceful?

I hope that our Supervisors have the guts to see this dispute resolved. The Long Term Water Agreement in (section IV A. type E vegetation paragraph 2) states. “The Department shall continue to provide water for Los Angeles-Owned land in Inyo County in as amount sufficient so that the water… Read more »

The roundwater pumping that is going on is indeed increasing and causing increasing damage to living things. We must protest and make sure that the city, the state and the agencies that govern understand that another way of living is possible. To get involved stop by the IOU Garden on… Read more »

“dragging its feet.” now going before a committee in August.

AND THE PUMPS KEEP ON PUMPING!

They’ll o what ever they want as long as they get away with it… playing the game so to speak. Like I said, take now and ask for forgiveness later!

They do what they want to do and ask for forgiveness later!!! The damage is done (and they already know why) yet they want it to be proved while pushing the burden on Inyo? What the heck!!!!!!!! The big boys kind of picking on he little and under funded guy!