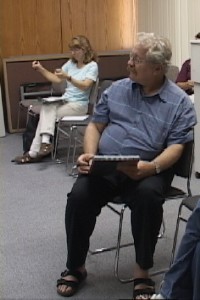 Management of groundwater pumping seems simple – see how far down the water goes and don't let it slip below the roots of plants and trees. Inyo County and DWP have never used that straight forward approach. The methods they did adopt – checking soil moisture and other factors – have not done the job to protect Owens Valley environment. For the next 3 years, Inyo and DWP will work on another way.

Studies on the Owens Valley underground have gone on for something like 25 years, but staff members have basically gone back to square one. At a meeting of the Technical Group – Inyo and DWP staff – officials handed out a work plan outline to show the public what issues they're studying and how they will proceed toward a new way to manage pumping.

Daniel Pritchett of the California Native Plant Society asked the officials if they would give the public a chance to comment on the outline. Inyo Water Director Tom Brooks and DWP Manager Gene Coufal said they don't have time to wait for public input, they need to move ahead toward their April, 2010 deadline.

Coufal did say there would be times in the future at a Technical Group meeting for the public to comment on their work. This time around, the two sides will look at the depth of groundwater as they put together new plans. They will study the depth of water and the condition of plants.

Though it would seem these elementary issues would have been resolved by now, the two adversaries have never agreed – even on the science of water.

Water Director Brooks has claimed that Inyo and DWP have moved ahead on ways to deal with one another and arrive at a good plan for the Valley.

If drought persists, three more years will see potential damage to plant life as the scientists and engineers struggle with management plans.

We work to provide daily news to all of the Eastern Sierra, in the tradition of Eastern Sierra News Service and the Sierra Wave. We bring you daily happenings, local politics, crime, government dealings and fun stuff. Please contact us.
View all posts by News Staff →
Mammoth Hires Private Investigator on Bear Matters
Bureaucrat Beat: Power to the People! Bad Stuff, and Community Feeling