Practicality went head to head with Bishop City ordinances at Monday’s Council meeting; practicality, in this case Grocery Outlet’s 70-square foot sign on a 25-foot pylon at the corner of Hwy. 6 and Wye Road, won. 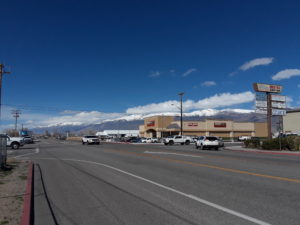 The argument made by the corporation’s representative and local owners was obvious. The north end of town’s vibe is far different than the downtown corridor for which current signage codes are appropriate.

Grocery Outlet opened late last year, already exceeding the maximum 80-square foot sign mandate. The store sported a couple of signs on the building and a small pylon sign at the north entrance. The Planning Commission had rejected the store’s request for a taller pylon sign.

Representatives from the corporate office came for the opening and recommended the owners, Dennis and Sarah Freundt, make another effort to get a taller pylon sign. The location sits in a sea of tall signs: K-Mart/Vons is 45-feet tall; businesses at the south corner of Wye and Hwy. 6 have their signs on a pylon as does the Ford dealership north of Grocery Outlet.

The Planning Commission turned down the request for a Conditional Use Permit in late February. The store appealed that decision to City Council.

Mitch Chemers made the initial pitch: the north end of town is industrial and built out so the sign wouldn’t set a precedent. The Freundts explained their long-term goals, all contingent on the success of the store. “We need the sign,” Dennis Freundt said. “Going north on Hwy. 6, you see the Wye Feed sign and not our building.”

Four Planning Commissioners stepped up and explained why two voted in favor of the permit and the other two voted against it.

Then it was the Council’s turn. Laura Smith agreed with the proponents: you can’t see the store from Hwy. 395 and the area is industrial. Stephen Muchovej didn’t want to set a precedent and didn’t think the sign would make a difference. Based on the artist’s rendering of the sign in place, Chris Costello thought it looked proportional and appropriate. Mayor Jim Ellis agreed, reminding the Council residents may know where the store is but the tourists won’t. “What you’re asking for is not out of place.”

Karen Schwartz was torn. The City has been in the process of defining itself for the last few years and is about to hire a consultant to help work on code changes for the downtown corridor. “We need to choose what we want to look like,” she said.

The Freundts were willing to hold off until the consultant was hired and started working on signage. But, City Administrator David Kelly explained that would take another six months at the very least since the consultant was not yet on board.

Costello moved to approve the Conditional Use Permit for the sign, Smith seconded it and the motion passed 3-2.