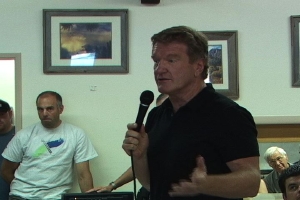 Persistent rumors that Vail Resorts will conclude a deal to buy Mammoth Mountain Ski Area prompted a call to Ski Area CEO Rusty Gregory. He said he is not sure where the rumors are coming from and that “There is no offering by Vail and no deal in the works.”

Gregory said he knows the people at Vail and took a trip there a few weeks ago. He said, “I spent time with them on ski industry matters.” He said there is nothing special going on other than running the resort and having good snow.

The CEO went further and said, “We’re not looking to sell.” Asked about the specific rumors that Vail Associates had purchased three houses in Mammoth Lakes and that a Vail corporate jet had been in Town recently, Gregory said, “Vail doesn’t have a jet, and they have not purchased housing in Mammoth Lakes.”

Gregory added that Mammoth Mountain is a “coveted asset for those who want a ski resort.” But, to the rumor that a Vail deal would close at the end of July, he said, “We’re not looking to sell.” We contacted Vail Resorts. A spokesperson in Corporate Communications said, “Thank you for reaching out to us but we have no comment on the matter.”

Gregory had brought up the Vail rumor at a recent staff meeting at the Mountain to also say these are just rumors.

Meanwhile, Gregory said that this season will likely see around 1.2 million visits, depending how the spring goes. Last year, with meager snowfall, the Mountain saw 920,000 visits. The previous year, a record snow year, hosted 1.3 million.

You were all wrong. Mammoth Mountain was in negotiations to acquire Big Bear Snow Summit and Bear Mountain resorts; it’s a done deal now and became public knowledge recently.

This is sad.. I have always said leave Mammoth alone !! It’s a southern Calif. Resort ! ..Stop trying to make it something else… the prices are already way to high … all the improvements were not necessary ! …. Customer Service is Bad ..and Customer Appreciation is none existent… Read more »

From a person who knows what goes on behind the closed doors at town Council meetings, I can honestly tell you that the council kowtows to Rusty Gregory’s commands. When a town manager comes along who is not a yes-man for Gregory, its bye-bye town manager. Gregory cleary has way… Read more »

Dave Wilbrecht did a fine job as CAO of Mono County and came up totally from the ranks. No boot-licking, butt-kissing, nothing like that whatsoever.The town grabbed him for good reason. During one heated meeting when Wilbrecht did not agree with Gregory, Gregory said: “You should be fired!” This is… Read more »

It would be a mistake to assume that Rusty would necessarily even have full-knowledge of/control over a purchase scenario. The Mountain is over-encumbered, and the debt/capital “stack” that effectively own it who would likely dictate any sale scenario. The pending Main Lodge land trade is little-doubt the only reason it… Read more »

As the economy worsens (and it WILL get worse) with only the richie-riches having all the buying power, I’m sure Gregory would like to compete with such places as Deer Valley Resort in Park City, Utah, where even the lift operators are groomed and snowboarding is prohibited. He’ll always have… Read more »

For all the Rusty haters here, if Vail or another ski company buys the resort we’ll lose the hometown feel that comes with Rusty being here. No matter how many here see it, he’s an asset to this community! I get that there’a hard feelings for those that feel he… Read more »

“You can’t fault a person for trying to do what’s best for his or her business.”

Yes I can, especially when that person is an elected official. You may want to brush up on municipal law before you impersonate a butt kissing politician!

Rusty is not an elected official. He’s a business manager and owner.
BK

Curious, You’re way off base here. He’s a business owner and nothing more. He chose to run this mountain to continue what Dave created. I think he’s done what he’s had to do considering his partner’s in this venture. He’s had to make difficult decisions that ultimately affect his friends… Read more »

Spin away, but I think you’ve been bought and paid for! Nothing wrong with profiting, profiting illegally is another matter all together!

Depends on ones actions, source of knowledge and of course profit/commissions, Benett. How many previous offers for the dog sled kennel business have ever been made?

"MTN" message board
Reply to  Curious

Curious, Who’s impersonating a politician? And if you call advocating for business then perhaps you should either quit your job and start a business so you can be in the shoes of a business owner for once. If you own a business then try losing money and see why that’s… Read more »

Cry me a river!

SierraFan- you gotta joking. Look at the several hundred people Rusty and company have laid off and hurt is numerous ways. Mammoth and June locals have not gained one thing with thier corporate bottom feeding ways.

Please, nice publicity block Sterlicht, put the rumors to bed beore it kills your deal! Vail is a public company folks, do you think Rusty is going to come out and say we have a deal in the works with Vail to manipulate their stock price? Love it how he… Read more »

Funny, I was driving down 395 a few weeks ago and noticed an SUV with a Vail resorts logo heading south from June Lake Junction toward Mammoth Lakes…I thought, that’s odd….

Tried? Were they not able to follow through with the purchase?

That’s between the two businesses.
BK

have you been to vail?it is ridiculous,you think only the rich can afford mammoth now,just wait

Uhh, hate to tell you but just because Rusty says its not happening right now doesn’t mean its not happening… Starwood promised its investors it would sell by a certain time frame, and that time is past. They are just waiting for a good EBIDA announcement keeping the price high… Read more »

So what is it if those in the know have made recent stock purchases?

Thanks for putting these rumors to bed Benett..