Great Basin Unified Air Pollution Control District’s Board of Directors took about an hour Wednesday morning to approve a revised State Implementation Plan to bring the Owens Lake into compliance with PM10 regulations while saving water and providing habitat values on the massive project. 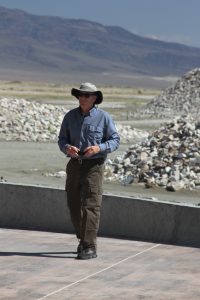 The 557-pages of documentation was the product of a cooperative effort between Los Angeles Department of Water and Power and Great Basin following nearly 30 years of litigation and a lot of blood-letting.

The SIP clearly defines the area of LADWP’s responsibility, provides alternatives to shallow flooding and allows for a narrower time frame on the shallow flooding tracts. The advantages for Great Basin and air-breathing residents of Owens Valley: the district has equally well-defined protocols for enforcement.

Great Basin Air Pollution Control Officer Phill Kiddoo provided the back story, starting with water diversions in the Los Angeles Aqueduct that turned the lake bed into a dust bowl 102 years ago. In 1987, the lake bed was found to be not in compliance with federal PM10 emissions. Eleven years later, LADWP was required to fix it. By 2006 Great Basin had identified a total of 45 square miles requiring mitigation. An additional 3.6 square miles was ear-marked in 2011 igniting a law suit bonfire.

A Stipulated Judgement settled the matter, confirming the 48.6 square mile area of responsibility, limiting any additional control area to 4.8 square miles and opening the door for LADWP to save water used on the control areas.

Richard Harasick, LADWP’s director of water operations opened the public comment period with a statement of the City’s “commitment to meet its responsibilities.” That commitment, Harasick indicated, cost LADWP $1.3 billion. “I’m super excited,” he said, noting the project has provided habitat, saved water and controlled the dust. “Both agencies are happy,” he said. “The dust has settled.”

Former air pollution control officer Ted Schade commented as a “private citizen.” After reviewing all the documents, Schade said “nothing was lost, nothing is missing. I approve on behalf of the air-breathing public.” Schade credited “those who came before,” including his predecessor Ellen Hardebeck and Great Basin attorney Brian Lamb.

Board member Mary Rawson made the motion to approve the SIP and accompanying documents with minor changes; the motions passed.

In a press release issued by Great Basin, Kiddoo stated “More than 75,000 tons of dust per year have been controlled with dust mitigation implementation at Owens Lake, making this the largest air pollution project in the history of the United States.”

The plan will now be submitted to the California Air Resources Board and the federal Environmental Protection Agency for approval and adoption.

While not directly related to the SIP, Keeler residents complained of progress to reduce dust off the Keeler Dunes, specifically the placement of straw bales that created “lumpy dunes rather than rolling dunes.” Bales abandoned in and around the community were also blamed for an increase in dust mold, allergies and mice. The re-vegetation of the dunes has had a 30- to 70-percent survival rate, but the consensus was the long-term project has fallen short of its goals.

During the Board reports, Jeff Griffiths noted it was important for LADWP to extend the spirit of cooperation. “We approved the SIP because it was the right thing to do. There are a lot of right things to do, LADWP leases, mitigation projects, irrigation for ranchers in the Owens Valley and Long Valley.”

Mono County Supervisor and Great Basin Board Member Fred Stump agreed that irrigation for pastureland in Long Valley was an issue for his constituents as well. Fifty years of irrigation has provided valuable habitat for sage grouse, a species that barely escaped listing as an endangered species following a cooperative plan to protect that habitat.

Following the board meeting’s closed session, board members, staff and others got a tour of the Owens Lake.