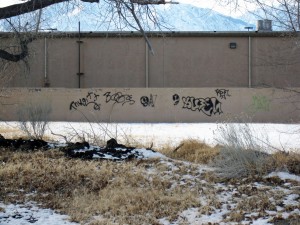 Graffiti on back wall of old Kmart building in Bishop in January.

Bill Cosby once said, ““Gray hair is god’s graffiti.”  That still leaves the door open to whether graffiti is beautiful or ugly, and most agree it comes uninvited.  In the Eastern Sierra, graffiti feels like a felony and almost always raises public ire until it’s removed.  That’s what happened recently in Bishop where a citizen saw a wide expanse of graffiti on the back wall of the old Kmart building just off Main St.

The citizen, who moved to the Owens Valley from Southern California and wishes to remain anonymous, said he had seen enough of graffiti and really wanted it gone from Bishop.  He reported the offense to Bishop Police.

It’s unclear exactly how the graffiti was painted over.  Bishop Police Chief Chris 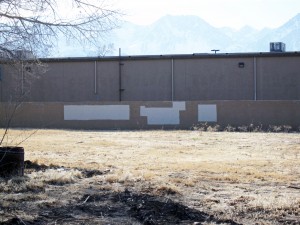 Painted over graffiti as it appears today

Carter said that typically his department contacts property owners to ask if they would arrange to get rid of the graffiti.  “If not,” said the Chief, “it could just lead to more.  We’ve been fortunate,” he said, “to not have a lot of that.  I hope we don’t.”

The concerned citizen made a string of phone calls in search of the property owner.  He first went to Kevin Wing of Safeway properties, was referred to Inge Ching who referred him to Angela Wong and on and on.  Finally he spoke to someone who denied ownership of the wall behind the old Kmart building, but in the end it turned out the property is owned by the parent company of that firm.  Safeway or Vons actually leases the entire shopping center that includes the former Kmart building.

While the painting over of the graffiti leaves white-looking rectangles on the gray wall, the graffiti is no more.  It’s unclear exactly why the lessees or property owners did the job, but cage rattling from the citizen and police certainly helped.

Cat, you can’t legally take a paint brush and clean up graffiti on someone else’s property, or public property.

Nor can the Police. My point being to do something besides complaining and sitting on your ass. Take the brush and paint and get permission from the owner if you may!

Well in defense of people who report it to the police, it is something that should be done, they can add it to reports of prior instances, if they catch someone for it, then there is more of a case against them. Just FYI. But you are so right cat,… Read more »

Why don’t the concerned citizens pick up paint and a brush and rid the world of the graffiti themselves??? From posting every MINOR arrest… to issues like this it seems to me that people retire here just to bitch about things. Make the community a good one, actively contribute to… Read more »

There’s two truck trailers parked behind the fairgrounds that are covered in graffiti. You can see them from 395. It’s behind the old boat mart building parked in the overflow camping area. Not sure if they came and were parked with the graffiti or it was added after they were… Read more »