By News Staff on March 4, 2013 in Government Agencies/Utilities 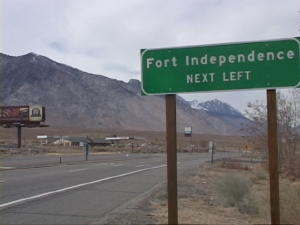 According to the State of California website, Governor Jerry Brown has signed an agreement that authorizes a Class III gambling casino that allows for up to 800 slot machines at Fort Independence Indian Reservation.

The agreement says Fort Independence will have to make quarterly payments based on net win into a Special Distribution Fund which will be used to pay state regulatory costs and grants to deal with gambling addiction. Before a casino can be built, the Fort Independence Tribe will have to perform what is called a Tribal Environmental Impact Report to address impacts on the local community and the County. Mitigations will have to be spelled out.

The building of the casino itself, according to the agreement, must meet state and county codes and regulations. Many other details are laid out in the 93-page document including licensing, inspections and audits. It says the Tribe will share up to 10% of the revenue with other tribes that are not gaming or that are otherwise not substantially benefiting from gaming.

Fort Independence Tribal Chairman Israel Naylor was not available for comment. Other spokesmen did confirm that there are plans to build a casino to conduct Class III gaming in the vicinity of the current Travel Plaza and Campground.

They tried this back in the 80’s…it didn’t work.

Oh Boo Hoo Tortoise. Cry my a river to LA would you. I am not gonna listen to anybody that complains about what development does to scenery especially when it is a tribe catching up to speed with he rest of the country. Yeah it’s a shame that tribes have… Read more »

With all the land lock and no chance to create more jobs in the valley it’s nice to see any entity try to expand and provide more jobs and opportunity for those who want to work, or new graduates looking for work. I would rather see growth and development in… Read more »

Eh, go south and look at what some of the tribes there did to the San Diego County back country. Really sad. Epic traffic jams on what used to be picturesque country roads leading to a mini Las Vegas casino/hotel/gas station/c-store.

More business for the CHP.

Tortoise you got that right. At least they’ll have to come to Bishop for court.

Yes, shop Bishop after your appearance before hizzoner.

Well, Indy needs all the help it can get. Does the city or county make tax dollars off this?

I think it depends on perceived mitigation needed.
BK