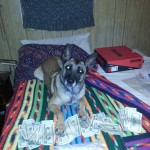 MONET’s goal is to eliminate and/or reduce controlled substance trafficking in Mono County by means of investigations that ultimately lead to the identification, apprehension, prosecution, and conviction of controlled substance dealers and offenders. During the past year, MONET has had success in working to combat the narcotics problems faced throughout Mono County. This success has largely been in part due to one particular member of the MONET team: “Tara” the 5-year old Belgian Malinois.

“Tara”, the narcotic detection K-9, is trained to detect the odor of narcotics, specifically marijuana, heroin, cocaine, ecstasy, methamphetamine and their derivatives. She is trained to alert to the presence of narcotic odor. Her alert consists of a noticeable change in behavior with a final response of barking, biting, or scratching at the location of the odor. Her alerts vary depending on the location of the odor. She is trained on odor strength varying from residual narcotic odors to the odor of pounds of narcotics.

Having a narcotics detection K-9, provides MONET and local law enforcement with an extra tool to help aid in the battle against the narcotics problems faced throughout Mono County. “Tara” has been instrumental in helping locate well-hidden narcotics, in both vehicles and buildings (such as homes), that her human counterpart would miss by just conducting a physical search. In Mono County, especially along the Hwy 395 corridor, more and more drug dealers and traffickers are bringing narcotics into and through our local communities. “Tara” helps find hidden narcotics in cars and other places that most people wouldn’t even think would be a hiding place for narcotics. With her keen detection skills, she can assist local law enforcement in conducting interdictory traffic stops on narcotics dealers and traffickers and hopefully recover the narcotics before they even enter our communities.

The Mono County Narcotics Enforcement Team (MONET), and the Mono County Sheriff’s Office, is fortunate to have “Tara” as a member of our team. As she celebrates her one-year anniversary, we look forward to her continued participation, dedication, and success in narcotics detection and recovery.

install a tara checkpoint on 395,eliminate all the crackheads and tweakers in mammeth

I like how you spelled it. Mammeth, good one!

These dogs are trained not only to point out drugs, but to point on command, such that it looks like there are drugs. Law enforcement uses them to gain access to vehicles in that way, without probable cause. I love dogs, but am not a fan of their being used… Read more »

Jason, don’t worry about it. Police would never, ever lie about their dog alerting or anything else.

Agreed. While there’s a place for police dogs, alerting for drugs is not that place. Sniffer dogs are basically tools for illegal searches; trick ponies for overzealous LEOs.

Smells like early retirement for Tara. Hope she’s got a pension.

Generally a police dogs handler takes the dog home as their pet. That is their “retirement”. She is earning hers.