Mark D. Wallace of Cougar Gold mining exploration threw out what some called a threat at Tuesday’s Mono Supervisors’ 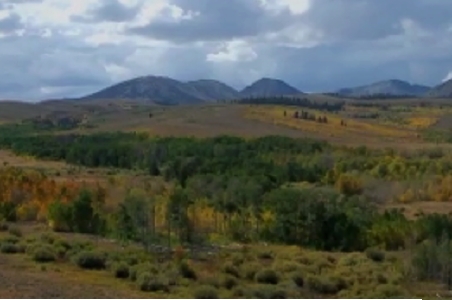 meeting on mining in the Bodie area. Wallace said that if the Wilderness Study Area in the mining vicinity were not released, he would take his time and money and go somewhere else. With gold at around $1,375 an ounce right now, most speculated Mr. Wallace would go somewhere in search of gold.

Wallace is president of Tigris Financial Group, involved with Cougar Gold. His past includes extensive government service from UN Ambassador to the United Nations to campaign advisor to George W. Bush and senior-advisor to the McCain-Palin campaign. The high-powered politician seemed to meet his match in Bridgeport. Wallace made it clear he could not invest millions more in Bodie if it would turn into actual Wilderness.

Tuesday’s meeting stretched into four hours of presentations by BLM and Cougar Gold along with citizens who spoke sometimes passionately for and against a gold mine near Bodie Hills. The Mono Supervisors kind of supported the release of the Wilderness Study Area at Bodie but fell short of such a recommendation to anyone. Supervisor Chair Hap Hazard described his own position as in favor of public discussion on the Wilderness Study Area. He pointed to the political reality that a negotiated position would have to rise out of local debate before anyone in Washington, D.C. would carry a bill forward.

Cougar Gold officials said they invested $7 million in exploration, which was handled with environmental kid gloves behind a ridge away from Bodie. Officials claimed actual mine development would result in more than 1,000 local jobs – an appealing prospect during a recession.

On the other side of the equation were those who fear destruction of habitats, wildlife and views at Bodie. After all the talk, Mono Supervisors Larry Johnston and Byng Hunt said they would like to see the entire Wilderness Study Area move toward real protection. Supervisors Viki Bauer and Tim Hansen supported release of the Wilderness Study Area and a mining operation. Chairman Hap Hazard said his position favors a public process to discuss the release of the WSA. He said he would support examination of every acre and views expressed by all stakeholders. He acknowledged the wilderness qualities in the WSA but also said the mine would exist over a ridge and not within sight of Bodie.

Hazard said he would like to see historical Bodie and after a drive down the hill, a visitors center next to a working and environmentally friendly mine operation. It’s unclear just what Cougar Gold will do next. BLM Field Director Bernadette Lovato said that Cougar Gold has not submitted a proposal at this point.

We work to provide daily news to all of the Eastern Sierra, in the tradition of Eastern Sierra News Service and the Sierra Wave. We bring you daily happenings, local politics, crime, government dealings and fun stuff. Please contact us.
View all posts by News Staff →
New investigative, high tech tool for Bishop Police
Eastside This Week: Trout, art, and wild chickens