By News Staff on November 1, 2013 in Government Agencies/Utilities 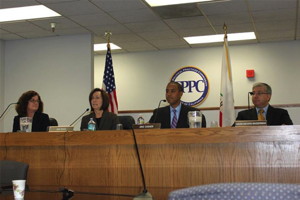 The California FPPC is the final word on gifts to officials.

In Los Angeles, the City Council has taken some criticism for refusal to limit their receipt of gifts. Instead, the southland Council wants to raise the top limit of each gift they can claim. In the Eastern Sierra, attorneys for our elected officials say their clients follow the Fair Political Practices Commission rules.

In the big city, concerns have grown so high about corruption that the City of Los Angeles maintains an Ethics Commission, a group that recommended a scale back of the LA City Council’s gifts. While LA officials wrangle with ethics, attorneys for the Mammoth and Bishop City Councils and Inyo and Mono County Supervisors say their clients have to abide by the FPPC. There have been no controversies or issues here over officials and gifts.

The Fair Political Practices Commission rules are complex and lengthy. They say most local officials are required to complete an ethics training course. Locally elected officials may not accept gifts from any single source totaling more than $440 in a calendar year, and they must report gifts from a single source that add up to $50. A gift can mean any payment or benefit, discount or rebate. Even some gifts to an official’s family members count. There are, of course, exceptions. Campaign contributions have to be reported under different rules.

Personal loans received by elected and appointed officials are also subject to limits and restrictions. As LA Times columnist Steve Lopez said, the idea is to discourage a pay to play culture. Lopez also questioned, Is anyone naive enough to think people who give gifts to officials get no advantage?

How much of a gift do I have to give to stop the solar ranch projects and who do I give it to?

The rule of thumb I’ve always been told for needing to file the dreaded form 700 with fppc is that if you make decisions that can even remotely involve money, either the organization or those that the organization deals with, you need to file and document that you have conflicts… Read more »

all gifts should have to be turned away,they are always to be seen as bribes