By News Staff on August 1, 2014 in Government Agencies/Utilities

The Los Angeles Times called it a “geyser of neglect”. The burst water main on Sunset Boulevard that flooded the UCLA campus and Pauley Pavilion caused the loss of more than 20 million gallons of water. People in the Eastern Sierra turned a critical eye on the Department of Water and Power for allowing infrastructure to create such waste in the third dry year. 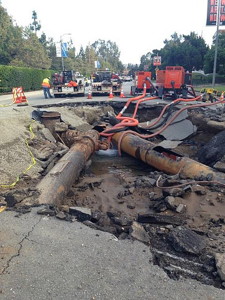 DWP scrambled to find the valve to shut off the geyser of water. It took awhile. According to the LA Times, the water lost from the break of the 90-year-old water main was enough to serve 155,000 people for a day. The Times also said more than a quarter of the City’s water pipes are more than 100 years old and that the DWP’s replacement rate is 315 years. The political heat is on in LA.

The break took place Tuesday and DWP was quoted as saying the rupture was not completely shut off by Wednesday. Reports indicated the water was finally shut off Thursday morning. Although DWP’s website says it was shut off Tuesday. At UCLA the damage was severe to sports facilities, parking garages and more of the campus.

DWP was also quoted as saying that no customers were without water Wednesday and water quality was not adversely impacted due to the break. The extensive repair and replacement work is underway by DWP. The utility is also offering claim forms for those who believe they were damaged.

We work to provide daily news to all of the Eastern Sierra, in the tradition of Eastern Sierra News Service and the Sierra Wave. We bring you daily happenings, local politics, crime, government dealings and fun stuff. Please contact us.
View all posts by News Staff →
Four Wheel Drive Club: ‘Sense of stewardship’
MCWD to sue APCD over geothermal project
13 Comments
Newest
Oldest Most Voted
Inline Feedbacks
View all comments

Liability on pipe used to be limited to 30 years. I can’t believe than any insurer would take that kind of risk, so I guess all the people who get their water from DWP will be getting stuck with the bills. Not to mention the waste of potable water.

Why do you assume a large city buys insurance for their infrastructure? It is not required by law. Big cities self insure.

I have officially stopped w/ the water rationing….In north LA county they are still building 15-20,000 homes as this happened.i live at the source …..screw them!!

Have you been to Orange County lately,??? same thing down there.. new houses and new lawns Everywhere. Caltrans was plenty of water for all the landscaping along the freeways as they flash water conservation messages on their roadway message signs. There is plenty of water for new water meters and… Read more »

Depending on where you are, freeways and golf courses are watered with reclaimed water. It could be drinking water, but most people can’t bring themselves to use “toilet to tap” water.

Orange County Water Authority has been treating waste water to a drinkable standard and pumping this water back into the Santa Ana River aquifer for many years, at least a decade. They are a pioneer in this technology. Cost per acre foot is comparable to imported Northern California water. LA… Read more »

it’s all about their pensions it always has been.
Pensions and benefits before infrastructure…
why spend money on a pipe you do not see..
After all it will last another 10 years..
The public pension ponzi scheme will implode.
it’s just a matter of time

If it’s predictable, it’s preventable. It was, and is. FIX IT!!

The problem is that even with some of the lowest utlity rates in the state LADWP ratepayers do not want to pay higher utility bills than they already do. Efforts to raise rates in LA have gone nowhere in the face of stiff public opposition. So you say fix it,… Read more »

How big was the Snowcreek flood? 1/2 million gallons http://sierrawave.net/27379/mammoth-water-district-response/

Let’s pressure DWP, but let’s also keep our own house in order.

The Snowcreek flood was from an improperly installed water main on Snowcreek’s property, not MCWD’s (you might want to read the press release you linked). Mammoth’s water mains only average ~20 years old and will outlive all of us and before their expected service lifespan is up. Thanks for showing… Read more »

I didn’t blame MCWD for Snowcreek (you might want to read what I wrote and not what you think I wrote). But you have to admit that the burst pipe was an infrastructure problem and a big leak–as much as 5% of the LA leak. Just because it wasn’t a… Read more »

DWP = 100 year old pipes and 100 year old Management style and the good ole boys, the Managers still have their jobs . Expect more of the same . If you are a ratepayer expect to pay for it all . Aside from the loss of water, the expense… Read more »