Georgan Stottlemyre, Northern Inyo Healthcare District’s Chief Human Relations Officer, is retiring after a total of 28 years of service to the district and the people it serves. Stottlemyre’s last day in office is Friday, June 24. 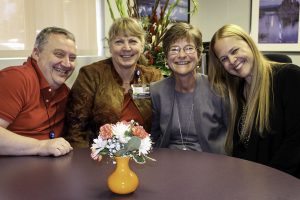 Kevin S. Flanigan, MD MBA, the District’s Chief Executive Officer, advised NIHD’s Board of Directors of Stottlemyre’s decision in the moments following the board’s June 15th approval of the new Nursing Union contract. Stottlemyre had served as a member of the NIHD negotiating team and had just led the board through the finer points of the new union contract.

“My emotions about retirement are mixed,” Stottlemyre said Tuesday. “I believe NIHD has a bright future, and I’m sad that I won’t be here every day to be a part of it with everyone. NIHD and all of its team members have been a significant part of my life for which I have always been and will remain forever grateful.”

Like many residents, Georgan Stottlemyre’s relationship with Northern Inyo Hospital began at birth. She would return to the hospital as a teen, working for a brief time as a volunteer aid known as a “candy striper.”

Briefly considering a career in nursing, she instead opted to study Business Administration with a concentration in Accounting. Graduation from Cal Poly San Luis Obispo followed, as did marriage. Stottlemyre began her accounting career with Arthur Andersen, LLP, one of the country’s big five accounting firms of the time. However, life in Los Angeles was not for her or her then-husband, David, and the couple soon returned to her hometown.

A 1983 telephone call from local CPA and friend Mike Holland advised her of an opening in the hospital’s billing department, and with that, she began a 28-year employment with NIHD. Stottlemyre left the hospital once for a five-year period in 2002 to serve as the Executive Director of Wild Iris Women’s Services. “I saw myself being there for two years, but the cause became a part of my heart, and I ended up staying for five years,” she said.

As she left the hospital for Wild Iris, Stottlemyre held the position of Director of Finance. Her successor was John Halfen, who would ultimately become one of the four NIHD Chief Executive Officers for whom she would work. The others include current CEO Dr. Flanigan, Victoria Alexander-Lane and Herm Spencer, who Stottlemyre calls “a model public servant.”

Wanting to return to her fiscal roots, Stottlemyre rejoined NIHD working in Marketing and Grant Writing. In 2009 she was asked if she would consider helping out in Human Relations. She agreed and ultimately rose to be the Chief Human Relations Officer, providing leadership in developing and executing human resource strategy in support of NIHD’s strategic plan.

Dr. Flanigan had high praise for Stottlemyre. “To me what is most incredible about Georgan is that her commitment to NIH/NIHD has always been first for her,” the CEO said. “When asked to change departments, she jumped right in, and not only gladly did so, but she excelled at it. When tasked with new challenges she never asked why me or why can’t someone else do that. Instead, she lived by the One Team philosophy since she started here and has always dedicated herself to NIHD and the patients we serve.”

Asked what accomplishments she is most proud of, Stottlemyre chose to discuss more personal goals rather than specific work-related goals. “Always doing my best to remain steadfast in my dedication and commitment to helping others,” she said. “Being blessed with and by all of the people I met over the years. I have enjoyed amazing support, opportunities, and friendships.”

She also cited the importance of being grateful for each day and the opportunities life presents and learning everything she could from others, seeing them succeed, and working together to weather challenges as they come.

“I am proud of spending the majority of my career in public service, working with and supporting good-hearted teams of people doing our best to contribute to the greater good,” she said. “That’s the best I could ask for.”

As for her retirement plans, Stottlemyre plans to spend more time with her partner, Bill St. Jean, who retired in 2009 from NIHD’s Diagnostic Imaging Department. “Bill’s been asking me to ‘come out and play’ for quite some time,” she said, smiling. “We want to do more hiking, backpacking, bicycling and motorcycling. I’ve been to Europe a number of times, but I would like to go back and finish trails I didn’t have the chance to complete. I’d also like to do a little more exploring in the U.S. and Canada.”

As for NIHD, Stottlemyre said it had been a privilege and an honor to work with everyone and serve NIHD and our communities. “I do appreciate and will genuinely miss everyone and wish everyone much future success.”

Recruiting efforts to fill Stottlemyre’s former position are under way.