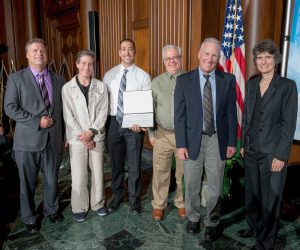 EPA recognized the Great Basin for its historic achievement to control air pollution from the dried Owens Lake bed in California, the largest source of particulate air pollution in the United States.

This is EPA’s highest national award to honor a project for its impact, innovation
and replicability in improving the nation’s air quality.

Over 100 years ago, the Owens River was diverted by the Los Angeles Aqueduct creating the dry lake bed. The resulting emissions of fine dust particles created a danger to public health, especially the children and elderly population.

In 2016, the Great Basin adopted a plan and rule that requires the installation and operation of the largest air pollution control project in U.S. history.

The project will remove over 150,000,000 pounds of harmful air pollutants each year,
transforming some of the nation’s dirtiest air into some of its cleanest.

“Each of these award winners has taken real, tangible steps to improve public health in
their communities by reducing air pollutants or greenhouse gases,” said Janet McCabe, acting assistant administrator for EPA’s Office of Air and Radiation. “These projects reflect the creativity and commitment of public and private sector organizations to make a difference and drive us toward a cleaner, healthier future.”

“For the first time in more than 100 years, the communities in the Owens Valley will
have same air quality that is required for the rest of the nation” said Phill Kiddoo, the Great Basin’s Air Pollution Control Officer. He continued, “The Great Basin staff has served the public and the environment with their highest dedication and skill, and are honored by this award.”

The EPA presented its award at a ceremony in Washington D.C. on June 28, 2016 with a keynote address given by Gina McCarthy, Administrator of the US EPA.

Just a reminder to the LADWP. If the City had been on the job in a sustainable manner over these decades the air pollution from Owens Lake might not have occurred . You, the DWP, are not a fly by night private enterprise with limited resources, but rather a well… Read more »

Congratulations on years of a job well done.