By News Staff on July 3, 2013 in Government Agencies/Utilities 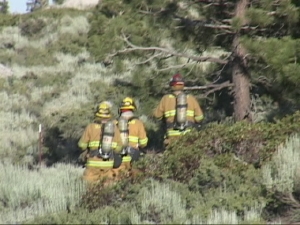 An investigation by Mammoth Lakes Fire Department has concluded that the construction crew at work on the Digital 395 project severed a main propane line into Mammoth Lakes because Amerigas made an improper determination for the crew to rely on markings of an earlier leak survey.  (See complete report at the end of the story.) 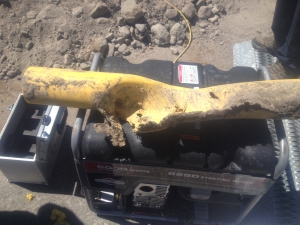 It was back on June 18th that the Kleven crew, working for Digital 395, went by spray-painted markings on the ground and severed one of two four-inch gas lines. Mammoth Fire responded. Mammoth Police closed Meridian Blvd as efforts continued to secure the area. According to the report from Mammoth Fire Division Chief Thom Heller, the incident occurred between two intersections of College Parkway.

Chief Brent Harper said the Kleven Crew did contact the service – Call Before You Dig – which contacts utilities with underground pipes in the area to assure they are marked for a digging project. Kleven relied on the markings on the ground after making that call. The markings were made by Health Consultants marking lines for a leak survey. Heller said this was not part of the USA Dig North program required before ground disturbance. Heller wrote, “The marking was never intended nor met the marking requirements for a dig request.”

Kleven’s superintendent saw the markings and made his digging calculations accordingly. These markings were yellowish colored paint dots on the dirt surface at about 12 yo 15 foot intervals. The crew assumed the gas line was in line with the dots. At 5:45 pm, the boring equipment hit one of two gas lines located next to each other.

Heller said it was calculated that about 800 gallons of propane discharged from the leak. A steady wind dispersed much of the gas. However, the report says that explosive concentrations did leak below ground and were verified at two openings near the entrance to Mammoth Elementary School.

Heller’s conclusion was, “There was a significant improper determination made by someone at Amerigas to rely on the markings of the leak survey and not independently mark or reinforce the markings for the boring project.” Heller’s report says that “This decision lead to inadequate markings and as no communications were initiated by anyone at Amerigas, the boring contractor assumed that the USA Dig markings were in place and that they were clear to begin their project.” The report says “The responsibility for the incident lies entirely on the decision made by Amerigas to rely on the markings for the previously marked non-related leak detection project.”

Praxis Associates are the lead contractor for the undergrounding of the Highway 395 Project.  In addition to providing digital cable connection in the Eastern Sierras, the project includes a service feed into the Town of Mammoth Lakes.  The incident occurred on Meridian Road between the two intersections of College Parkway.  The work is being accomplished by several sub-contractors and includes a combination of excavation and boring.  The individual sub-contractors are responsible for making contact with all of the utility companies for marking of their line locations.

In this particular instance, the two four inch propane lines were marked by Heath Consultants, but not as part of the USA Dig North program that is required prior to commencing any ground disturbance.  In a discussion with Heath Consultants Job Superintendent (Joe Cortez), his employees marked the line as part of a leak survey contract that Heath Consultants had with Amerigas.  The marking was never intended nor met the marking requirements for a dig request.  The Field Superintendent (Mr. Preciado) for Kleven saw the marked line and was under the impression that the propane lines were within 2-3 feet off the asphalt paved edge and that if they stayed 12 feet out from the edge of asphalt, their boring would be fine.  The indication that Mr. Preciado had was that the propane lines went below a drop-inlet and culvert that was situated a couple of feet off of the pavement on Meridian Road.  As a precaution, Mr. Preciado had a member of his crew pothole the area around the drop-inlet to determine exactly where the propane lines were located.  Kleven proceeded with their portion of the project in this area believing that they would be no closer than seven feet from the gaslines.

Heath Consultants marked the line using yellowish colored dots painted on the dirt surface.  The dots appeared to be seen at approximately 12 to 15 foot intervals.  The effectiveness of the painting could be called into question upon initial observation.  The markings consisted of sprayed paint on the soil surface which did not result in a very effective mark in places and with the vegetation surrounding the markings, many markings were hard to distinguish.  To see the markings one had to walk immediately along the roadway, but as the markings were never intended to meet utility marking purposes, the marks served the purpose they were initially intended for.  Mr. Preciado relayed that he was able to line up the dots to determine a line location, but with no indication of any kind of off-sets, his crew proceeded with the assumption that the line went in line with the dots.  A single yellow dot was found in the vicinity of where the gasline was hit, but without any supplemental information (off-set markings, change in direction, difficulty of spotting the dots due to infrequent makings, vegetation of similar color) it would have been difficult for someone to recognize that this dot was part of the larger grouping of markings.

The Kleven crew proceeded with the boring using a technique where the operator walks along the ground in-line with the head of the boring machine while it is working.  It is very possible that the operator did not see the dot which was 9 feet 8 inches off-set from the remainder of the dots.  At approximately 1745 hours the head of the boring machine hit the gasline.  As there are two parallel four inch gaslines, fortunately only one line was hit.  It also turned out that only one of the two lines had tracer wire running with the pipe.  At this location it is the line furthest from the roadway pavement that has the tracer wire.

It was calculated that there were approximately 800 gallons of propane discharged from the leak.  As there was a rather steady wind the evening of June 18, the gas leaking above ground quickly dispersed.  However, gas also leaked below ground into a culvert system, and explosive concentrations were verified at two openings approximately 100 to 120 feet respectively, near the entrance to Mammoth Elementary School.  Meridian Boulevard was closed for over two hours, 23 fire department members responded, two scheduled police officers were tied up, as was the medic unit assigned to the southern part of Mono County.

There was a significant improper determination made by someone at Amerigas to rely on the markings of the leak survey and not independently mark or reinforce the markings for the boring project.  This decision lead to inadequate markings and as no communications were initiated by anyone at Amerigas, the boring contractor (Kleven) assumed that the USA Dig markings were in place and that they were clear to begin their project.  While it can be argued that the boring machine operator should have been observant for any markings while he was directing the machine, the responsibility for the incident lies entirely on the decision made by Amerigas to rely on the markings for the previously marked non-related leak detection project.