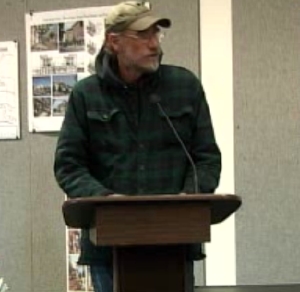 It seems like only yesterday that they went to sleep in their dens, but the bears of Mammoth Lakes have already come to life. Bear Man Steve Searles gave the Mammoth Town Council the wildlife word at their recent meeting.

Searles said that the local bobcats and raccoons are doing fine. Deer have begun to migrate and will soon cross the highway. So, he advised motorists to keep an eye out and go slow.

And, the bears, Searles said, have all “broken their den”, meaning they are awake and out looking for food. Searles told the Council that even if there are more winter-like storms, the bears will not go back to their dens. Searles said, “Once they consume food, it’s game on with the bears.”

Searles said it’s time to lock down the dumpsters and keep food out of your cars. He added that coyotes have been active. Searles said some people have told him they are concerned about the coyotes’ howling. Does it mean they have killed local pets? Searles assured the public it does not. He said they make noise in relation to territory and mating.

Searles added that locals may see one particular yearling in local parking lots. Searles said someone has fed that coyote. Not a good idea, he said.