By News Staff on December 11, 2012 in Government Agencies/Utilities 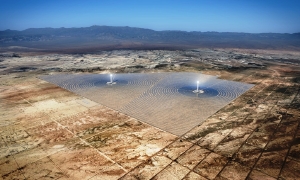 They like the idea of a major solar project in Inyo County, but the Board of Supervisors do not want to gamble with tax dollars when it comes to the service impacts of the BrightSource Energy Hidden Hills Solar project in far eastern Inyo. After two hours of talk Tuesday, the Board declined to support an agreement proposed by BrightSource but did approve a sales tax agreement of its own.

As Supervisor Rick Pucci said, it’s “an extremely complex matter.” He pointed to the national and state benefits of solar power but also to the potential costs to Inyo taxpayers, mostly for law enforcement and road costs in the project area which will include 170,000 solar panels that generate 250 megawatts of power.

Two reports faced the Supervisors – one in which the California Energy Commission claims Inyo will net more than $61 million over the course of the project and the other report from Inyo’s own consultant and staff that says the County will lose nearly $22 million. Supervisor Pucci said, “This huge discrepancy really bothers me.” He said as a representative of the public, “It’s difficult to be a gambler. We can’t gamble with the public’s money.”

Pucci also pointed out that a state agency, the California Energy Commission, has overall authority on this project. So, in the end, that agency can make the decisions. Meanwhile, Inyo has taken its stand – that BrightSource will cause some $90 million in impacts – mostly with the addition of seven Sheriff’s deputies and a new substation plus major repairs expected to the Old Spanish Trail road due to significantly increased traffic by 2300 employees on the project and delivery vehicles.

BrightSource Vice President Chris Moore told the Inyo Board that there are different assumptions. BrightSource doesn’t think their project will require seven new deputies and a new substation. Moore said, “Two deputies might be needed during construction and then would go away over time.” He did agree BrightSource would repair the Old Spanish Trail if damaged.

Inyo County Administrator Kevin Carunchio said County Department heads took a conservative approach when they estimated the cost impacts of the big solar project. Inyo Sheriff’s Lieutenant Jeff Hollowell said the Department does not agree with the estimate of two deputies for the new project.

The agreement proposed by BrightSource would guarantee $8.8 million but require Inyo County to agree not to go to the State for the some $90 million in impacts.

The private land owner working with BrightSource favored the project and so did a real estate agent connected with the Charleston View development in the area. Another land owner who owns a bar close to the project wants it to happen. The Tecopa Fire Chief Larry Levy warned of the need for more law enforcement.

The Supervisors unanimously approved their staff’s proposed agreement. It is unknown if more negotiations with BrightSource will follow.

Funny to reread this, considering the new board did end up gambling after all.

First off it is a desert a beautiful desert. It was a desert before us even before the arrival of man, a non-native species and will continue to be when we are all gone. First thing why I do not like PV: 1. Panels are mainly made in foreign countries… Read more »

BrightSource has placed the Hidden Hills project in Inyo County on hold and has notified the
California Energy Commission of such. We will post a story on this today.
Benett Kessler

December 21, 2012 NOTICE OF AVAILABILITY OF FINAL STAFF ASSESSMENT FOR THE PROPOSED HIDDEN HILLS SOLAR ELECTRIC PROJECT (11-AFC-2) 1. As stated on page 2 of the document. Once operational, the entire 500-MW net project would require up to 140 acre feet of groundwater per year (an acre foot of… Read more »

Supervisor Rick Pucci is right to be concerned about security costs of the proposed Hidden Hills project. I can imagine a plot where a terrorist use a kids’ field trip school bus to transport a large bomb into the facility, and what an explosion would do to the field of… Read more »

You could imagine the same scenario at Main Lodge — or Vons — or anywhere. That doesn’t validate home photovoltaic systems. They are a good idea but not an ultimate solution unless you have the money to make your home completely off the grid. And then you’d still have to… Read more »

That’s ridiculous. Terrorists don’t care about targets like that, because blowing one to bits doesnt cause fear in the population, it just costs money. People just shrug it off, and mumble something about insurance. Probably make a good movie though.

joe- you have been watching to many Bruce Willis movies.

Building solar should always be encouraged but I can’t see why any county should be in the red from such a development. If anything large projects should bring net profits through the various forms of taxes paid either by the employees or from the developers themselves. Just be smart about… Read more »

It looks like the supervisors finally learned something from the Mammoth Lakes bankruptcy debacle. Or are they just “playing poker” to see what kind of money they can get out of Bright Source? Either way, they should take careful note of how inaccurate the Bright Source estimate of costs of… Read more »

I was actually at the meeting yesterday. Brightsource most recent video on their current project,”Ivanpah” has no audio describing what your seeing…..If this is how they up-date the public with their projects, with no voice-over script, one would have to wonder what else that doesn’t go on with their projects……… Read more »

Good for Inyo County. BrightSource got 1.7 free billion dollars of your taxes to build their Ivanpah boondoggle which will run on solar energy, but will need natural gas to keep it going when the sun won’t shine. Huge carbon footprint, an environmental disaster for the tortoise and the jobs… Read more »

Well, Ivanpah is in California which contributed some money so hiring from California makes sense. Natural gas is the fossil fuel most used in the U.S. to generate electricity and since the Ivanpah site generates a significant portion of their generating capacity from the Sun, one would think that it’s… Read more »

Well said Ken Warner, but there is an alternative to large scale remote solar, and a better one at that! Distributed rooftop photovoltaic (PV) panels is arguably far superior to huge projects such as Ivanpah or this one proposed for construction in Inyo County at the Hidden Hills location. Distributed… Read more »

Not defending all of this but the comment about the environmental disaster for the desert tortoise, I don’t believe that is really the case on the magnitude it is intended to help your case. The reason I say that, it is very fashionable to throw in something like the desert… Read more »

Why is BrightSource against Inyo getting 90 million in impacts from the state?

Probably because the State would require BrightSource to pay it.
BK

Brightsource should incorporate the area and form it’s own police department. Not much different than what Mammoth Lakes did for MMSA. Inyo Co. did the right thing by not agreeing to front any money before the project is built. Let Brightsource build the project then see what sorts of county… Read more »