By News Staff on November 8, 2012 in Government Agencies/Utilities 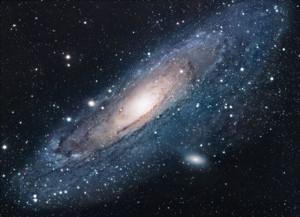 The Owens Valley Radio Observatory (OVRO) and Cerro Coso Community
College invite you to attend this semester’s third broadcast of our
“Explore Your Universe” Fall Lecture Series. Each installment features
talks by prominent astronomers, aiming to share astronomy research and
findings from OVRO.

The next episode takes place on Friday, November 9, at 7pm, when Dr. Anthony Readhead from the California Institute of Technology will talk about Supermassive Black Holes.  This special
lecture will take place at Bishop Union High School’s library, at 301 N. Fowler Street.

In 1918 a strange jet-like feature was observed protruding from the
nucleus of a distant giant galaxy in the constellation of Virgo.  This
remained an utter mystery until 1963, when the first discovered quasar
was also found to have a jet protruding from its nucleus.  Quasars are
active galaxies with nuclei the size of the solar system that outshine
100 billion suns.  The central engines in quasars are now known to be
supermassive black holes which eject matter in narrow jets along their
spin axes at close to the speed of light.

Professor Readhead will present observations of these galaxies spanning the electromagnetic
spectrum — from radio to gamma-ray energies — from OVRO and other
observatories around the globe, that are revealing how black holes
accomplish this remarkable feat.

Professor Readhead was born in South Africa and received his PhD from
Cambridge, England before moving to Caltech in 1977 where he has been
ever since.  He is the Rawn Professor of Astronomy at Caltech, the
Director of the Owens Valley Radio Observatory and a Senior Research
Scientist at the Jet Propulsion Laboratory.

His interest in astronomy was sparked at an early age and he became an avid amateur astronomer,
serving as a night assistant at the Ratcliffe observatory near
Pretoria in his teenage years.  His major scientific interests are
active galaxies and the supermassive black holes that power them, and
cosmology – the study of the evolution of the universe.

We work to provide daily news to all of the Eastern Sierra, in the tradition of Eastern Sierra News Service and the Sierra Wave. We bring you daily happenings, local politics, crime, government dealings and fun stuff. Please contact us.
View all posts by News Staff →
Mono Sheriff announces retirement
MMSA CEO goes public