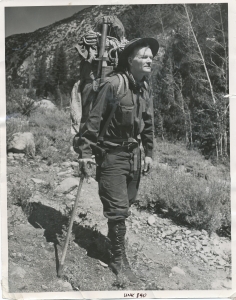 Norman Clyde in the prime of his outdoor life, looking as imposing as the granite peaks of the Sierra which he helped scale in the 1930s, with the help of just a rope, hob-nailed boots, his ice axe and few other pioneering climbers such as Glen Dawson and Jules Eichorn. Photo courtesy the Eastern California Museum.

Norman Clyde remains a larger-than-life figure whose accomplishments as a mountaineer and climber are sometimes overshadowed today by a focus on a small number of personal quirks and amazing accomplishments that have also added to his status as a legendary figure in the history of the Eastern Sierra.

To commemorate and celebrate all aspects of Clyde’s legacy, the Eastern California Museum is hosting the first annual Norman Clyde Birthday Bash on Saturday April 19, from 11 a.m. to 5 p.m., with a day of bluegrass music by local favorites, Idle Hands, and free food and cake, exhibits and speakers recalling their personal encounters and experiences with Clyde, and discussing his place in the pantheon of climbers, mountaineers and, yes, grumpy old slackers.

Norman Clyde’s life resonates with many people today because he was “living the dream” before that hackneyed phrase ever came into being. He spent the bulk of his life roaming the High Sierra as a climber and mountain guide and generally doing what he wanted to do, unencumbered by such trifles as a permanent, full-time job, a wife or family, or the need to socialize or worry about what other people thought of him or his lifestyle.

He was maybe one of the first successful “climbing bums” whose life has served as model for thousands who have followed, quite literally, in his footsteps as they, too, trek into the Sierra backcountry looking either for a challenge posed by rock and granite, or solitude and the beauty of an unspoiled landscape.

Numerous elements of Clyde’s life and exploits in the mountains have reached almost mythical proportions. He first gained fame as a climber with speed ascents of Mt. Shasta, and by climbing 36 peaks in 36 days in Glacier National Park. He was married to Winnie Bolster, whose death in 1919 left Clyde a life-long widower. During the 1920s, Clyde went on epic climbing binges, bagging dozens of first ascents at a stretch, which cemented his reputation as a mountaineer. He would eventually record more than 100 first accents in the Sierra. No one else even came close.

In the 1930s, he was a key figure in the Sierra Club’s effort to train mountaineers on the use of ropes and other technical climbing techniques. Thus, he added “firsts” on technical climbing routes, including the East Face of Mt. Whitney, to his catalog of achievements. His long association with the Sierra Club was solidified as he became a notable presence during the Club’s High Trips, which brought hundreds of people to the Sierra every summer.

But the off-mountain legend also was growing. Clyde was a college educated school teacher of unbending standards, and gained notoriety when, as principal of the Owens Valley School in Independence, he actually shot a car carrying young men he believed were out to vandalize the school.

He resigned and took up the job he would have the rest of his life: writer, photographer, trip leader, speaker, climber and guide, with notable paying stints as a one-man search and rescue team who never failed to reach a plane crash or the body of a fallen climber or lost hiker.

Then there was his pack. It was an 80-pound extravaganza of canvas, wood, straps and rope that contained, boots, iron cookware, extra pistols, food, bedding and books in Greek, Latin and German. He became “The Pack With Legs,” or “The Pack Who Walked Like a Man.”

The Museum’s birthday bash will begin by paying homage to “The Pack,” with a fun walk. Folks are asked to bring a backpack and carry a little weight on the 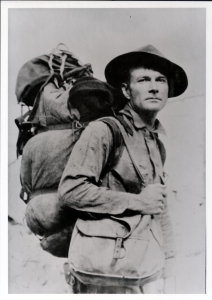 A young Norman Clyde in the 1920s, when he undertook legendary climbing sprees in the Eastern Sierra. He eventually recorded more than 100 first ascents and numerous other “firsts,” including winter ascents and new routes. Photo courtesy the Eastern California Museum.

moderate walk along Independence Creek and through town. Prizes, including a replica Norman Clyde campaign hat, will be awarded to those carrying the most weight or with the best costume. The walk will start at the Museum, 155 N. Grant St., at 11 a.m., but anyone can complete the loop during the day to earn a handshake and maybe a hat.

Local acoustic, bluegrass band Idle Hands will start playing around noon. Free hot dogs, chips, drinks and birthday cake will be on hand, and donations will be accepted for beer and wine, provided by the Friends of the Eastern California Museum.

Starting at 1:45 p.m., and continuing throughout the afternoon, a number of local speakers will offer brief comments on Norman or talk about their memorable encounters with Clyde.

Speakers include (in no particular order): Author and climber Andy Selters, who wrote the text for the Museum’s permanent Norman Clyde exhibit; Phil Pister, retired DFW supervisor; Norm Milleron, a friend of Clyde’s who also penned a small book about their friendship; and Don Lauria.

At 2 p.m., the band will take a break so everyone can catch a special presentation. Dennis Kruska will show a video interview with a spry, 102-year-old Glen Dawson, who as a young man in the 1930s, climbed with Clyde and, with Clyde, led the first ascent of the East Face of Mt. Whitney.

Peter Ireland will pitch his vintage, 1930s camp for the day, and talk with people about the gear and other elements that made up a comfy tent camp.  Also on display all day will be a backpacking camp recalling the days of canvas tents and mummy bags, from the 1940s and 1950s.

Providing some perspective on the advances in climbing gear will be several local climbers and guides, including SP Parker, who will display vintage photos and gear, and Howie Schwartz and Neil Satterfield, who will have vintage gear on display.

I thought you would enjoy this Jon…
I know I did.

“I wish I were with some of the wild people that run in the woods, and know nothing about accomplishments!”