Members of Eastern Sierra Guide Puppies, the local puppy raising club of Guide Dogs for the Blind (GDB), are celebrating the graduation of yellow Labrador Retriever Fuller as a full fledged Guide Dog. 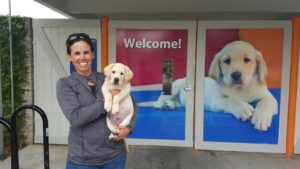 Raised in Mammoth Lakes by Anne Parkes, Fuller graduated from the GDB campus in San Rafael on May 27 with his new partner, Grayson Stogsdill of Tucson, Arizona. Parkes participated in the graduation, presenting Fuller to Stogsdill during the ceremony. Fuller is his first Guide Dog.

Fuller is the fourth puppy Parkes has raised for GDB, and the first to graduate. She says, “People always ask how we as puppy raisers can give up a puppy.  I wish I could bottle up the feeling of pride I had on graduation day and share it when they ask.  The tears of sadness I felt when I dropped him off for formal training turned into tears of pride and joy on graduation day.  It was truly incredible to see this puppy that had been a part of my life for 16 months guiding Grayson and fulfilling his true purpose.” 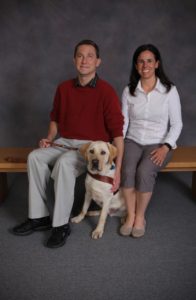 “It takes a village (or a couple of towns in our case) to raise a puppy,” Parkes continued. “ I’d like to thank all the local businesses who welcomed Fuller and I while he was in training.  Without your support, Fuller would not have become the well adjusted, well socialized, and successful guide dog that he is today.”

Eastern Sierra Guide Puppies club leader Betsy Thomsen stated that the entire club had a hand in helping raise Fuller. “Fuller’s success is due to the hard work and commitment of many people. Anne Parkes is an amazing puppy raiser who invested time, energy and love in Fuller, helping him to reach his full potential. Other members of the club puppy sat Fuller, or socialized him in the community.”

Guide Dogs for the Blind uses yellow and black Labrador Retrievers, Golden Retrievers and Lab/Golden crosses as guides. The puppies are born at the Guide Dog kennels in San Rafael and placed in the homes of volunteer puppy raisers when they are 8 to 10 weeks old.

Eastern Sierra Guide Puppies meets regularly in Bishop, and takes the puppies on socialization outings around the Eastern Sierra. New members are welcome! For more information on the local club contact Betsy Thomsen at 760-920-8891 or Anne Parkes at 760-920-0762. To learn more about Guide Dogs for the Blind please visit www.guidedogs.com.