By News Staff on March 4, 2014 in Government Agencies/Utilities 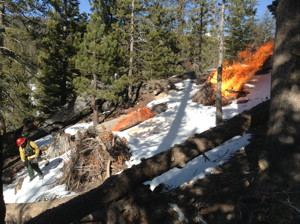 This project goal was to reduce fuel loads following the Devils Windstorm of 2011. During that storm, thousands of trees in the Reds Meadow Valley were blown down, greatly increasing the amount of hazardous fuels. While the windstorm was a natural event, forest structure has been altered after a century of fire suppression, as well as the 1992 Rainbow Fire. To reduce fire risk, fire crews thinned and piled the slash from downed trees in 2012 and 2013. The piles are burned when adequate snow cover exists to prevent the fire from spreading and to reduce burn intensity.

When piles were constructed, finer fuels (e.g. pine needles) that are easier to light are placed in the middle of the pile to provide a good place for ignition, although some removal of snow is sometimes needed to get the pile going. Once the piles have burned down, crews go back and “chunk” or move partially or unburned fuel on the perimeter of the pile into the center. This promotes more complete combustion and higher fuel reduction.

During the pile burning, smoke production is minimal but may have been visible from Mammoth Mountain, June Mountain, Minaret Vista, and the Thousand Island Lakes Area. Morning inversion patterns hold smoke in the Reds Meadow Valley. The timing of this project takes advantage of safe burning conditions and limited visitation to the Red Meadow Valley. However, residents or recreationalists who are smoke sensitive should avoid physical exertion when smoke is present.

We work to provide daily news to all of the Eastern Sierra, in the tradition of Eastern Sierra News Service and the Sierra Wave. We bring you daily happenings, local politics, crime, government dealings and fun stuff. Please contact us.
View all posts by News Staff →
Lehman will not seek re-election
Habitat Improvement Project Monday