Organizers of the Internationally Acclaimed Independence Fruitcake Festival have announced that they have received a ransom note from the well known bad guys, The Candied Fruit Gang stating they have taken the Festival’s Fruitcake King hostage. 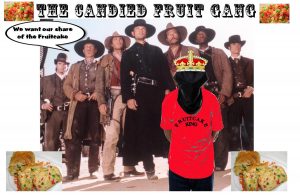 The King has presided over this historic and well respected event which is held every Holiday Season in the Inyo County seat of Independence. Festival Organizers have stated The Candied Fruit Gang is out to extract revenge, for the Fruitcake Festival’s domination of the nation’s candied fruit supply for the past several years. The Gang is reported to be demanding a ransom of fruitcakes … equal to the Kings weight, to be delivered to an undisclosed location in order to obtain the King’s release.

“These bad guys are trying to ruin our Christmas Spirit” said Independence Civic Club President Nancy Masters, “but they can’t do it. Those of us that revel in the glory of Fruitcake are strong and we will not have our Holiday’s ruined!”

Master’s went on “We’re going to pay the ransom, but we will not be able to do so until after Christmas. There simply is not enough Fruitcake available right now, to meet the huge price these bad guys are demanding. Without the Fruitcake King, we’ll have to postpone the Fruitcake Festival this year, but we’ll be back in 2017 with a Festival bigger and better than ever.”

Masters has stated that in its place, and to keep the Holiday Spirit alive, the Independence Civic Club will be sponsoring a Community Yuletide Gathering this year.

The event will be held at the American Legion Hall in Independence on Saturday December 10th at 6 p.m. Community members are invited to bring a dessert of their choice to be shared at a dessert potluck.

To keep Holiday spirits high, a reading of other peoples (humorous) Holiday disasters and catastrophes will take place at the Gathering.

The evening will conclude with a tasting of the archival fruitcake in memory of the fallen fruitcakes of Holiday Seasons past, and a moment of silence to honor the missing Fruitcake King.

Attendees to the Yuletide Holiday Gathering are also invited to wear their favorite…ugliest Holiday Sweater to the event, to show in solidarity to The Candied Fruit Gang … their Holiday Spirit cannot be deterred.