If you “love the night life”… and you “gotta’ boogie on the disco ‘round”, oh yeah,” well then you would have really loved the Independence Civic Club’s 10th Annual Fruitcake Festival held last weekend at the American Legion Hall. Despite the craziness, no arrests were reported. 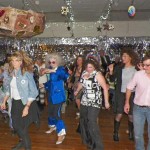 This year’s theme, “Saturday Night Fruitcake Fever!” brought back fond memories for the 200 in attendance. Disco was music for dancing. Do you remember when you were younger, and how much you loved to dance? Now you’re older and life just sucks. Well, those fond dance moves and memories were recaptured by lots of people on the packed dance floor of the American Legion Hall.

Apparently high-octane fruitcake coupled with “enhanced” rum-infused eggnog could bring out the night life in just about anyone, including the walking dead, although to be clear, this event is family-friendly event, so there was plenty of regular eggnog and fruitcake to go around. The kids appeared to be having a great time as well. 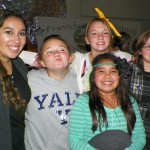 The Disco-era of the 70s and 80s will either bring back fond memories of that time in your life…or make you cringe, which makes it the perfect riposte to the mixed feelings that many have towards fruitcake. Disco, much like fruitcake, is either loved, hated, or tolerated.

The era of big hair, loud-colored shirts, tight bell-bottom pants, and hot pants was very much in evidence as festivalgoers broke out clothing they’ve kept hidden in their closets for years, secretly hoping for the return of disco so they can get their lives back! Of course, some of these clothing items are, well, a bit tight due more to time than fashion! Tight looked pretty darn good on a few…and maybe not so much on a few others. 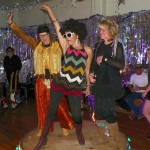 Returning Master of Ceremonies Michael Pietrobon kept things moving along to the driving disco-beat and music provided by Sandy and the High Country Band. Pietrobon has been juggling the hats of director, cinematographer and editor for a very long time. His visit to the Fruitcake Festival several years ago has had him coming back ever since and becoming an integral part of the madness.

Providing his own unique brand of entertainment was the reigning perennial Fruitcake King and “Disco God,” Bryan Kosters of Independence. The only thing hotter than Bryan tonight in his tight bell-bottom pants was his lovely wife, Carma Roper, rocking a pair of hot pants that had more than a few men to stepping outside to catch their breath and cool off! 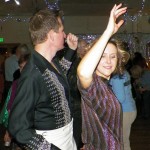 Bartender Rose Masters, wearing a stunning green outfit is about the only explanation anyone needs as to why green is many people’s favorite color. Gillian Carunchio also showed why the color black is also popular and just looks “darn good” on some people, especially on her!

With all the imbibing and cheer, coupled with the frenetic disco moves on the dance floor, it is doubtful that the heaters in the building ever needed to be turned on inside the Legion Hall. 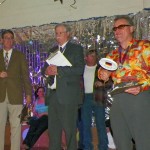 Fruitcake Festival Judge Kevin Carunchio shows the nutometer used to determine fruitcake with most solids as other judges, Dean Stout and Brian Lamb look on

Winner of “Most Solids” was Holly Moore, wife of Owens Valley School District Superintendent Dan Moore. Holly definitely knows how to load up a fruitcake with solids as determined by the official nutometer wielded by Judge Carunchio. It’s not known how she keeps Dan in line, but it’s entirely possible she simply threatens to throw a slice of her fruitcake at him. 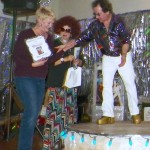 Holly Moore, Winner of Fruitcake with most solids

The “Traveled Farthest Fruitcake” award went to Judy and Sue Palmer, while the “Oldest Fruitcake” went to Robert Elliott of Intercourse, PA.  Considering its origin, the claim that it dated back to 1852 raised a few eyebrows. On the other hand, who would still be alive to dispute it?

“Best of Theme” went to Janis Odum. She sported the best-looking, lights-flashing fruitcake hat ever seen! Looking like a cast member from SNL’s conehead skits, she could have easily arrived from the planet Remulak.

Very little fruitcake was left over at the end of the night. It appears some people take it home to go skeet-shooting the next day. 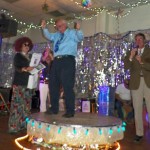 Robert Ellliott claimed Oldest Fruitcake from 1852…no is still alive to dispute it. 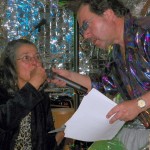 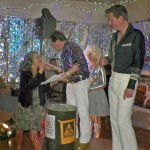 Another year surviving the Annual Oldest Fruitcake Taste Test. No one died despite Hazard Warning clearly posted on container it is kept in year-to-year 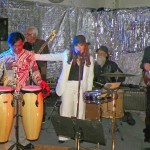 Great article by Charles James-it was spot on, and described all the disco antics so well, I’m just sorry he was too busy working to show us his “boogie shoes” on the dance floor!