By News Staff on July 22, 2014 in Government Agencies/Utilities 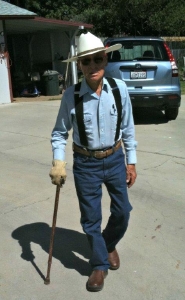 Born in La Puente, California to Helen Walsh and Francisco Grazide II on March 13th, 1913, Frank Grazide lived a long and prosperous life, passing away peacefully in Bishop, California on July 16th at the age of 101.  Frank is lovingly remembered by his family and friends as a remarkable man who in his later years defied odds by living an active and interesting life, with the vigor of a man decades younger than his true age.   Frank was raised in La Puente in the Los Angeles area on the Grazide ranch in the family adobe home, which later went on to become a state landmark for its rare heritage as an adobe house which was built by his grandfather Francisco Grazide for his young bride Isabel Rowland in 1875.

An explorer at heart, Frank left home early when the family fortune was lost in the great depression, and spent many years travelling the West Coast as a truck driver, establishing a pattern of travel that would stick throughout his life.   Frank eventually joined the Navy, working aboard the USS Onslow as an engine mechanic where he proudly served during World War II from 1942-1944.  He would recall vividly his duties and experiences as a young man in the armed services,  it was a time in his life he spoke of with a distinct pride.   He married Arlene Grazide and had four children; Philip, Michele, Rex and Dana Grazide.  After his time in the Navy, he became an avid sailor and enjoyed many years of sailing out of Newport Harbor with his boats.  Making frequent trips to Catalina and Mexico with members of the family, he instilled a particular love of the ocean in his youngest sons Rex and Dana.  Frank eventually made a home for himself in Bishop, CA, having first gone through Bishop on a cattle drive as a very young man on horseback, making the trek from the family homestead in La Puente, it is hard to imagine such an adventure this day in age.

An entrepreneur his entire life, Frank enjoyed the freedom of trucking in his early days, and then as an investor in business and real estate later, he was buying and selling up until the very last years of his life.  He believed in staying active, and never felt comfortable sitting for too long, he loved to stay on the move.   A generous and supportive man, he made a positive impact on everyone in his life, and will be sadly missed but happily celebrated by his extensive network of family and friends.  He is preceded in death by his life partner Katherine Lewis, son Phillip Grazide, daughter Michele Smith and granddaughter Jana Barnes.  His remaining grandchildren include Nicole Behrendt,  Ron Bartely, Amber Smith, Philip Grazide Jr., David Grazide, and Stephanie Grazide-Tidwell.  He leaves behind 8 great grandchildren and 10 great great grandchildren, all of whom were blessed to have had him in their lives for such an extraordinarily long time.

A graveside service will take place at the East Line Street Cemetery at 10:00am on Friday, July 25th.  A reception will follow at Frank’s favorite spot in town, Jack’s Waffle Shop, from 11:30am-1:00pm.  Frank enjoyed countless breakfasts there for the last several years of his life, and his family would like to celebrate with those who knew him, his favorite breakfast items will be served in his honor.

We work to provide daily news to all of the Eastern Sierra, in the tradition of Eastern Sierra News Service and the Sierra Wave. We bring you daily happenings, local politics, crime, government dealings and fun stuff. Please contact us.
View all posts by News Staff →
APCD approves Ormat EIS/EIR without monitoring plan
SCE stocks trout
2 Comments
Newest
Oldest Most Voted
Inline Feedbacks
View all comments

Mongo loves life, this is for Frank… Frank tought me that misery loves company but happiness is content on its own… Reading taught me how to spell taught. Nature the artist taught me to follow in its footsteps. Frank taught me that I could be a good example to my… Read more »

Frank will be missed. I enjoyed listening to his stories that told of events spanning across so many changes in our society from war, the economy and recreation. One could really see the love of life in his eyes.