Independence – Inyo County’s County Counsel, Marge Kemp Williams, hereby announces she received an Advice Opinion from the state’s Fair Political Practices Commission (FPPC) an Advice
Opinion in which Commission staff concluded the Board of Supervisors’ decisions required to be made as part of the Board’s consideration of the Adventure Trails project “will not have a reasonably foreseeable material financial effect on any of the supervisors’ interests.” 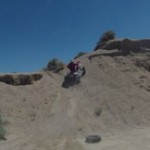 According to Kemp-Williams, “The FPPC’s ruling clears the way for each member of the Board of Supervisors to participate in the decision making process regarding the Adventure Trails project, if
he so chooses.”

The meeting location was moved from the Board of Supervisors Chambers to the Legion Hall to accommodate what is expected to be
an overflow crowd.

Just to get back to basics… Access to open space is wonderful. That is why most of us are here. Environmental Deficit is a clinical diagnosis. Get some quiet time with the rocks, sand, water, vegetation, open skies and wildlife and you will be healthier. The concern for this project… Read more »

If the OHV use is as safe as proponents are saying why is the indemnification from liability required by the State? Project proponents can prove they really believe it is safe and also resolve a lot of that concern by putting their cards and money on the table. The Board… Read more »

@ Mr. James, Whew! – quite a mouthful there my friend. I’m not inclined to address each of your many assertions, but I think it’s fair to say that we disagree in a few areas. I’ll make a few comments but try to keep it shorter in the interest of… Read more »

I hope the decision makers have been paying attention to the various comments and their votes from the numerous articles posted on this topic. The court of public opinion has clearly been leaning in opposition to this proposal.

That’s pure baloney Mr. Jones. This measure would pass by overwhelming support by the locals. Where was all the opposition during all the council meetings I attended in Bishop? Only two spoke against this measure. The supervisors would be foolish to believe that.

@Trouble, I came to that conclusion by reading the forum comments and their votes from the various articles on the subject posted on this website. Not everyone is going to travel up or down the valley to attend council meetings. This forum is accessible to all and typically offers a… Read more »

I attended the 8/6 meeting at the City Council chambers and did not speak up at that time. Although I had submitted comments during the scoping process – and been to various meetings – I hadn’t fully reviewed the DEIR prior to the August meeting. My intent was to hear… Read more »

Agenda 21 strongly supports private property and the U.S. Constitution. In rural areas there are rarely adequate easements. Where easements do not exist or are inadequate to cover this type of use or encumbrance it is about actually taking property square footage from our front yards. (Where the existing road… Read more »

The Elitists want Agenda 21 to become the Law of the Land, then all y’all can be taxed to death on the very air you breath, under the guise of Carbon Tax, the question is, What will happen to those that can’t pay ??

Wayne, agreed. I think the pilot project is going to negatively impact those neighborhoods, who may OR may not have residents that enjoy off highway vehicles, which historically have not been allowed to travel on street legal roads. They key for the supervisors will be to find the constituents (in… Read more »

The adventure trails advocates have already blighted our area with ugly sign posts and the posts with signs on them do not make a lot of sense. Also I believe they may be illegal posts due to there placement and should be capable of breaking away under impact most sign… Read more »

Come on Wayne. You are really reaching now. “Signage will adversely affect the curb appeal”??? Have you been to a trail head in the last 10 yrs. No complaints about those huh?

Wayne, you think seeing people outside enjoying themselves freely will erode property values? I don’t see it that way at all. I think most visors will have a more friendly inviting opinion of our valley. Hell, right now were mostly known as a speed trap.

If I knew when I bought my house that the neighborhood kids would use nearby unbuilt lots as ad-hoc motocross tracks I would not have bought where I did. I love to ride motorcycles, but when I’m home I trying to relax the last thing I want to hear are… Read more »

One comment implies in lofty future-tense language that Adventure Trails will resolve our concerns about jobs for our grandchildren. Another comment states it will only allow a few insured off roaders to drive to stores. These are mutually exclusive in that it will take many more than a few to… Read more »

Wayne, please, provide any proof, or even a logical argument for: “Regardless of actual changes in OHV use even the presence of such signage will adversely affect the curb appeal and result in erosion of property values over time throughout these neighborhoods.” How is it possible that property values will… Read more »

Did former 4th District Supervisor Marty Fortney recuse himself from voting on this project during his tenure? It would appear from the Disqualification standards and legal requirements set out by the Political Reform Act (excerpt below) that Supervisor Fortney had a material interest in the project. In fact, several of… Read more »

Nick, are you joking? How many vacations have you had at Aberdeen’s resort? Unbelievable!

Aggressive, all this law does is allow a few insured off roaders drive to our stores. All that other National Park and potential impacts stuff you bring up, I summed up above and agian as complete hog wash!

Take a look at the photo in the EIR of what the EIR calls the “narrows on Lubken Canyon Road”. The existing right-of-way and easement are inadequate for two way traffic. It is identified as part of a combined use route and to avoid liability must be brought up to… Read more »

Wayne ,Lubken Caynon Rd. is a all paved road with no traffic problems at all. Just more hog wash in my book.

The Aggressive Progressive
Reply to  Trouble

That’s cool man.. I just see everybody that wants this project, only to have a lil more freedom when riding, but I am coming from the perspective that we should embrace the “freedom to be responsible” for what is going on to our MotherEarth! Take a look at our daily… Read more »

I give credit to the county for sending this issue off to the FPPC for an opinion. It was the right thing to do. Now, the county can do the right thing again and give consideration to ALL the impacts that will come along with this proposal, not just the… Read more »

From what I understand, the main opposition to this, already got their street taken off the map. All two of them!

The Aggressive Progressive
Reply to  Trouble

I don’t know Trouble, I think the opposition to this project has ground to stand on, considering the project is a “pilot project”, information should be made available and the County leaders should have a strong Idea of potential impacts when asked by the concerned citizens, and since it is… Read more »

What would our grandchildren want? How about a job? How about opportunity to raise a family in an area such as ours without having to work 2 or 3 jobs? How about not having to leave this area to find a decent job or have a decent life? How about… Read more »

You are conflicted Charles. You imply that you want to preserve the beauty and environment that gives us that beauty but want a booming economy to support more people. Those two ideas conflict with each other. To get a booming economy, you have to bring more people to the whole… Read more »

Ken, I am not conflicted in the least. I completely reject your premise that a “booming economy” (your words by the way, not mine) to support more people in the Eastern Sierra would “directly contribute to the degradation of our environment.” Do I want to give future generations (including those… Read more »

Charles James: I’ve been through the cycle too many times. A nice quiet place becomes over crowded and over developed and soon is no longer a nice place to live. The whole of Southern California is an object lesson. The things I saw and did before the developers brought “Prosperity”… Read more »

Ken, on this matter I think you have forgotten the fact that ,thanks to DWP owned land in the Owens Valley, we are 99% land locked. Over crowding will never happen as long as DWP owns the water rights.

Trouble: No I haven’t forgotten about LADWP’s land ownership. But if and when the Owens Valley starts being aggressively developed. LADWP will make a fortune selling strategically placed pieces for development. They are just waiting for the right time.

So National Parks are a progressive idea that serve mostly the environmental elitists? I would respectfully disagree. And many of the business owners and their employees who benefit from Yosemite’s 4 million annual visitors would likely disagree as well. According to the NPS, Yosemite brings 379 million dollars to local… Read more »

Charles O. Jones, Where to begin? Let’s start with your straw-man fallacy pretending to respond to my comments. I did not say– or imply that “national parks are a progressive idea that serve mostly the environmental elitists.” You also use facts about the economic success of Yosemite National Park to… Read more »

Yup, all those low income home owners and renters near the Exide battery plant who are arguing for more stringent emissions controls on the plant so they don’t have lead contamination on their properties are the economic elites. And likewise the community surrounding the big Exxon Mobil refinery in Torrance… Read more »

Yes our grandchildren would want a future! Take a look at yourself and these inherently flawed institutionalized systems we all participate in, in this society if you want a job with “job security”, you need resource turnover (at unprecedented levels), there is no actual preservation, sustainability or conservation in this… Read more »