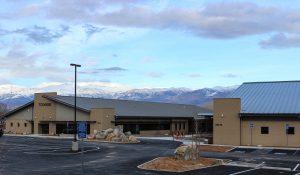 To date, that investigation has not begun according to board member John Glazier.

“It’s politics,” said Glazier in a phone interview pointing a finger at board members from the Bishop Paiute Tribe, one of seven Tribes within the TIHP Eastern Sierra service area. Glazier cited mutterings that the lease on the land the clinic was built on wasn’t handled in the open—something Glazier denies vehemently. “It was all in the open,” he said, “with the approval of the Tribal Council.”

The TIHP board was sent a letter from Kiddoo’s assistant, Geraldine Weaver maintaining she was not being given the authority to make decisions. The July 14 meeting was called to discuss the complaint. The vote at that initial meeting was 8-4 to suspend the four administrators. As chairman, Glazier could not vote. Glazier resigned as chair; a second meeting was called, the re-vote was still 7-6.

The biggest issue for Glazier is the survival of the clinic, built with a $14 million long-term loan from the United States Department of Agriculture and operated with both state and federal grant funds.

The former board chair had to tell Lent of the board’s decision. As he headed toward Lent’s office, “I kept asking myself ‘why am I doing this?’” Glazier still can’t figure it all out. “This is overkill for what is a simple personnel issue.”

“David (Lent) did what I do (as chair of the Bridgeport Indian Colony),” he said. “I hire highly-qualified people to do the jobs.”

As CEO, Lent makes the final decision on hires and raises. He had frozen raises, according to Glazier, but when Frey was given added responsibility as COO, his salary increased. But Glazier can’t figure out why Daniels was included in the four suspensions.

Glazier contacted the California Rural Indian Health Board to send staffers to work with interim CEO Cynthia Stone and interim HR manager Weaver to help operate the clinic. His concern is keeping medical staff on board and keeping up with the requirements and reporting on the grants. “The doctors and pharmacy threatened to walk,” he said.

USDA staffers have called a meeting of the TIHP board this Thursday at 10 a.m. at the clinic on See Vee Lane. Apparently, one of the stipulations of the loan to build the clinic was notification of the department of 20-percent of the administration changed. The four suspendees represent 80-percent of the clinic’s administrators.

The awful truth is that the board, and the local tribe, have been unhappy with allowing non-tribal members to use the facility, and are removing the non-tribal upper management as an underhanded way of dealing with this animosity. But the reality is that such a facility cannot afford to operate… Read more »

If you actually knew what the employees of TIHP were feeling and thinking, you would not say “Business as usual”. Why would the suspended staff even want to come back after this? What a mess and what a horrible place to work. Emailing all employees to not support or got… Read more »

This is all a ploy to stir up trouble and cause chaos from the suspended staff. This is the best paying jobs that the suspended staff has ever had so of course they’re trying any dirty tactic to try and make the board look bad. There will be no defualt… Read more »

I think you’re measuring the suspended staff by your own standard of behavior. Maybe you would attempt to cause chaos if you were in their positions. Given no notice of a two month suspension without pay, prior to an investigation being initiated reflects gross mismanagement and an abuse of authority.

Also, the interim management threatened Toiyabe employees to not come to the meeting on Thursday. They had a stack of blank checks ready to hand out final paychecks, as that hard working employee who just wanted information about the future of the organization, would be fired on the spot. Sounds… Read more »

That’s awful! A total lack of transparency and major intimidation. It makes me think they don’t have anything, otherwise the BOD wouldn’t have an issue sharing information. How can they treat the employees like that?

The board has a great responsibility to continue the high quality health care that has been provided to both native and non-native area residents for many years. The TIHP deserves the support of all, and especially its directors who are ultimately responsible. Lives must not be put at risk. If… Read more »

I agree. The Board of Directors has a responsibility to all the communities that the Toiyabe clinics serve. Leaving the project without the necessary administration to ensure the ongoing funding streams because of a minor grievance submitted by a lower-tiered staff person is reckless and risks the tribes access to… Read more »

Could that happen? If funding is withdrawn, what about the $14 million dollar loan? If the TIHP BODs, which includes two Bishop Tribal council members, allows the loan to default, what happens then? How is the tribe going to make good on 14 million?

The casino profits were put up for collateral.

The fact is, suspending top management staff based on this one complaint, and then not following through with an unbiased investigation, will make it very tough for Toyiable to recruit and hire decent professional staff. Tribe politics should be kept as far away from the professional operations as possible

Sounds like politics or someone trying to fulfill their agenda. I find it interesting that the person who made the complaint is now the interim HR Manager. It doesn’t appear that the tribe wants to “protect” the investigation in order to gather accurate and unbiased information to make an impartial… Read more »

I agree and in this case it’s “tribes” as all the local area tribes are represented in the Toiyabe Indian Health Project. Of greatest concern is the risk to health care for hundreds of people.

IT’S ABOUT TIME SOMEONE LOOKS INTO THIS ENDLESS MADNESS.

The Toiyabe clinic in Lone Pine is a GREAT place,with a great staff for medical and dental…..but my one needed visit to the Bishop clinic,they had a really grumpy,rude woman working the counter at the dental office..

They obviously did something wrong to have all those Board members vote to suspend them. As a community member and patient of this facilty I would want to see true Clinic/Hospital managers running this facility and not the suspended people that are groveling to come back. I would love to… Read more »

The people that were suspended are all professionals that received no due process. While it’s easy to make accusations, there has not been any investigation to determine the validity of any wrong doing. All the providers and pharmacists are board certified and licensed, so substandard care is a harsh statement… Read more »