On the afternoon of Sunday, April 7, the Inyo County Sheriff’s Office received an emergency satellite transmission requesting a rescue near Mt. Whitney. A party of four climbers attempting to summit Mt. Russell (14,088’) had gotten off route while descending and were stuck on the side of a cliff above a steep couloir (around 13,000’ in elevation). The party had no way of getting either up or down. 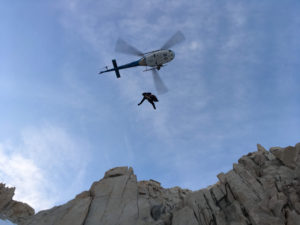 Inyo County Search and Rescue and CHP – Inland Division Air Operations were asked to assist in the rescue. At approximately 5:30 PM, CHP located the four subjects on Mt. Russell and lowered an Inyo SAR team member via a 100’ cable hoist to their position. The Inyo SAR member secured the climbers on the cliff and hooked up one of the subjects to be hoisted into the helicopter.

The helicopter took the first subject to the Lone Pine airport and refueled. When the helicopter returned, the rescue team hoisted the remaining three climbers and dropped them to their camp near Lower Boyscout Lake one at a time. The Inyo SAR member was finally hoisted into the helicopter at approximately 7:30 PM and taken to Lone Pine. 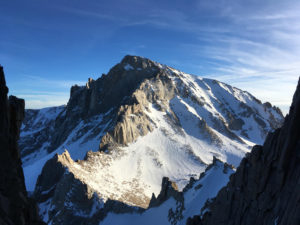 Because of a big winter season, the High Sierra still has a significant amount of snow. Difficult and potentially life-threatening alpine conditions will likely remain in the Sierra backcountry throughout the spring and into summer; and climbers and hikers attempting Whitney and surrounding peaks need to be properly prepared and experienced.

Inyo SAR and the Inyo County Sheriff’s Office would like to thank the CHP Inland Division Air Operations crew for their professionalism and extreme skill while aiding in this rescue.

The Inyo SAR team works in cooperation with and under the authority of the Inyo County Sheriff’s Department, and is an all-volunteer, non-profit organization. Check out the Inyo SAR website at http://inyosar.com for more information or to make a donation

Opening Up - Engineered For Adventure