Local residents report that a former Lone Pine man, Roman Brand, 23, was arrested in the death of his girlfriend’s 6-month-old baby. 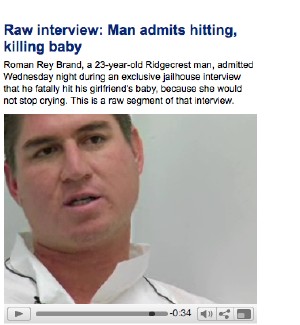 Brand and his girlfriend live in Ridgecrest and were visiting his mother in Bakersfield at the time of the incident. News reports said that the infant was taken to Mercy Southwest Hospital where she died soon after. Reports said that an autopsy determined the cause of death was blunt force trauma and her death was ruled as a homicide.

Brand was arrested and was being held on $1 million bail. In the jailhouse interview posted on the KBAK-TV website, Brand said that he had not had a good night’s sleep and was trying to get some rest. He said the baby was fidgety and kept crying, so, out of frustration, he said he started to hit the baby on her head.

Local residents said that Brand grew up in Lone Pine and attended school there. Reports indicated that Brand and his family moved to Ridgecrest about 6 years ago.

We work to provide daily news to all of the Eastern Sierra, in the tradition of Eastern Sierra News Service and the Sierra Wave. We bring you daily happenings, local politics, crime, government dealings and fun stuff. Please contact us.
View all posts by News Staff →
High Unemployment Hovers in the Eastern Sierra
Food Needs Continue in Inyo-Mono