Bob Michener passed away at his home on Saturday, April 18.  He was 91 years old.  Bob was born on January 23, 1924, to Robert Ezra and Elizabeth Mae Michener.  He attended Dorsey High School in Los Angeles and graduated in 1942. 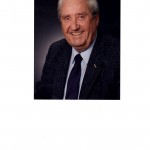 Bob proudly enlisted in the Marine Corps in 1943 during World War II.  He served until 1946, when he was honorably discharged as a Staff Sergeant.  He then attended Graceland Junior College in Iowa, where he met the love of his life, Wilma Hartschen.  The two graduated Graceland in 1947 and got married.

They decided to move back to California, where Bob then attended the University of Southern California.  He graduated in 1951 with a degree in Business Administration.  Bob then joined the LA County Sherriff’s Department in 1951, and served until 1963.

At that time, he and Wilma had decided they had enough of LA.  They moved to Mammoth Lakes, a spot they frequently visited, to raise their 3 young children, Robin, Scott, and Jon.  Bob, with his outgoing personality, was always interested in public service.  While living in Mammoth, Bob served on the Mono County Planning Commission as well as the Mono County Board of Education for many years.

A service will be held Saturday, May 2nd, at 11:00 am at the Church Of Jesus Christ Of Latter Day Saints at 725 Keough St. in Bishop.  A luncheon will be held immediately afterwards at the church.

Pete, I agree. What a wonderful character he was. Bob use to come up to our place, Sabrina Camp to sell us our fishing tackle . I believe he sold from American Wholesale. Bob and Wilma lived in Mammoth at the time. He was so much fun to be around.… Read more »

I raise a glass to Bob Michener. Even in recent years, as Bob’s health was on the wane, he still had that sparkle in his eyes that was never about him. Bob was a true public servant that was not afraid to “take it on the chin” if some disagreed… Read more »