By News Staff on February 17, 2012 in Government Agencies/Utilities 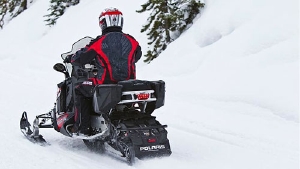 Inyo National Forest law enforcement personnel have once again started their snowmobile patrols for the 2012 season. In a continuing effort to protect congressionally designated wilderness within the Inyo National Forest from illegal snowmobile use, law enforcement patrols will be routinely patrolling problem areas both on skis and snowmobiles and through aerial reconnaissance.  The patrols will be looking for people whose snowmobiles have strayed into “off-limit” areas of the Forest, such as designated wilderness and other areas specifically closed to snowmobiles.  Areas that will be regularly patrolled include: designated wilderness and Research Natural Areas, the Mammoth Lakes Basin, Obsidian Dome cross-country ski trails, Shady Rest cross-country ski trails and the area west of the G-trail from June Lake Junction south to the Glass Creek Hill.  Free Winter Recreation Trail maps that display where the motorized restricted areas are located can be picked up at the Mammoth Welcome Center.

During the week of February 13, six local residents were cited for trespassing in the Owens River Headwaters Wilderness, in the area known as the Slash Pit.  Unfortunately reduced snowpack this year has led to a concentration of use in this area.   Law enforcement officials would like to thank the public for information that they have provided regarding snowmobile trespass, and they encourage anyone witnessing violations to call the Interagency Dispatch Center at 760-873-2405.  For more information, please contact Lisa Walker, Recreation Specialist, at 760-647-3031.

The nation’s federally designated wilderness areas have prohibited motorized use since the passing of the 1964 Wilderness Act, making them off limits to all motorized vehicles.  Despite these prohibitions snowmobile tracks and public reports indicate that numerous riders venture into these closed areas every winter season.  Riding in a congressionally designated wilderness or other closed area is a Federal and state offense carrying fines of up to $5,000 and/or six months in jail, in addition to possible seizure of the snowmobiles used in the commission of the crime.

It is the rider’s responsibility to know where these closed or restricted areas are located and their boundaries.  Major winter trailheads and launching points have kiosks with maps showing the restricted areas; maps are also posted online at http://www.mammothweb.com/scripts/usfs/snowcat.cfm.

If in doubt, you should check with a local Ranger Station or visitor center.

The Forest Service recognizes that in this low snowpack year that roads, trails and areas to ride snowmobiles are less available than in normal snow years. This does not, however, change the boundaries of the closed areas.   It is important that riders know where the open snowmobiling areas are located, and that they stick to these areas for their snowmobile riding.

I think it is probably a fraction of the green sticker ticket sales.

Glad to see they finally caught these “Hard Core” criminals.

How much of the Green sticker funds do they spend on this project every year? On so called PUBLIC Lands

How about that, look who the abusers are that are ruining it for everyone.

They not only know better, they also actually know where these areas are.

Who are the abusers Rob?

I was kind of suprised when I read “six local residents were cited for trespassing in the Owens River Headwaters Wilderness”. So I’d have to say the locals are the abusers. Wish they would have posted names & ages. Snowmobliers get a bad enough rap as it is, we sure… Read more »

LOL Well thank you Rob I try to be positive about things, and I try to point out when I see things that are not making anything positive in the situation. Right on.

It’s kind of funny that all our politicians fight to keep the beaches open for public access, but want to close us off our public lands. Bet most of them live by a beach.

Access and activities to the beaches are being slowly eroded as well. Walk around Mission Bay in San Diego and the ubiquitous signs with the list of “nos” gets longer every year. Brick by brick the people’s supposed right to access the common lands of our country is being diminished.… Read more »

Tourbillion- you are correct. I was focused on the right to access they have been gaining ground on in Malibu mostly.

You are kind of right. You can bet that the beaches the politicians live at are restricted access. Try going to the beach in Santa Barbara. When Nixon was Pres. He had a house on the bluff overlooking Trestles in a gated and secured community that was built next to… Read more »

What a joke the slash pits is nothing but a land fill / gravel pit from the early days of building the ski resort. Just a stones throw away up hill is the massive open air cesspool for MMI & Main Lodge. Majestic wilderness worth protecting my ass. Somebody had… Read more »

Ken – I’m not against common sense rules, but I do believe we are slowly being shoved off of pubic lands. The beaches are the one exception to this that I can think of.
Oh, and I luv a good bumper sticker:)

You are right sensing more and more restrictions to access to various parts of public lands. And beaches are really no exception. Not that the beaches themselves are being closed. But access to them can be closed simply by building a gated community across the path to the beach. And… Read more »

Yeah Ken, you’re right there .. I do see the need to control access, totally. If we didn’t have some sort of control, the few that can’t behave themselves, will run amok. But sometimes restriction is abused by those who decide what to control. We see it with the latest… Read more »

“…these machines are on snow not on the ground (dirt) the snow melts away, there is no trace.” What is the minimum amount of snow that should be the cutoff? Is there a set time of year when those machines are allowed or should all public land be open for… Read more »

Wayne, as you can see I don’t like all this calling the police on people for minor things. Just one more example of the way our country is turning into a police state. Hell you make the news up here for minor infractions.

Looks like tha Greeeenn Ghestapppo is out in force, they need to generate more revenue to feed their bloated salaries and pension funds….dont worry because the coming Economic Collapse will put them all in their place….

J-Spoon….OK,which one is it …….an economic collapse that is going to soon end the World?……or,as you posted on another story,Iran,nuclear bombs,and WW 3 on the horizon?…Maybe got to turn on FOX NEWS tonite to see which one is coming first.

One side I see, is the issue of snow mobiles in designated areas, it is the law, so you pay if you play. I don’t side with the whole idea of prohibition of snow mobiles in these areas. I think it is a case where the law does not allow… Read more »

Call 1 800 rat u out to report friendly people lost in the mountains.

Lost in the mountains?….Good excuse,but won’t hold water…Knew of a vehicle that got stuck in a Death Valley Wilderness area,claimed he was lost,and from what I heard got a HUGE fine…as well as a Holiday tow fee when the NPS said the vehicle had to be removed that day….January 1st….Happy… Read more »