The public got a sneak peak at six areas in the White and Sierra Nevada mountains that may be recommended as Wilderness areas Tuesday evening at the Inyo National Forest offices in Bishop.

Those six areas include: 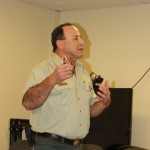 The event was described as an open house with no official public comment period. However, following Forest Supervisor Ed Armenta’s presentation, the approximately 30 in attendance had a chance to review maps and question Forest Service staff.

“The staff looked objectively at the Forest,” Armenta said, noting that Wilderness designations can be an emotional topic. Armenta outlined what constituted “Wilderness character:” untrammeled, natural, undeveloped ecosystems without evidence of human development, offering solitude and having unique qualities.

The process also included filtering out areas that would present issues if managed as Wilderness. One of those filters was the presence of endangered or threatened species. Armenta explained that sage grouse habitat was not included because of the extensive management efforts within that habitat.

The same applied to wild horse herd areas in the White Mountains. Herd management would require activities banned within Wilderness. “We don’t want to tie our hands,” he said. Other filters included the presence of motorized trails and past activities, like mining, that had degraded Wilderness qualities.

As part of the Forest Service’s 2012 Planning Rule, the office was required to identify areas that would qualify as Wilderness. The next step is the development of a Draft Environmental Impact Study expected to be published this fall. The DEIS will include a 90-day comment period. Details on the proposed acreage are on the Inyo National Forest website at www.fs.usda.gov/detail/r5/landmanagement/planning/?cid-STELPRD3803608

After the way the NPS handled themselves during the gov shutdown they’ve been on the top of my S_ list ever since.

Canceling the bike event in DV was also BS.

Low-inyo What does Obama got against our dogs?

I love my guns, money , unions and anything fast. What’s that make me?

I just now read an article about a company called Aramark Corp. taking over the services and concession stands at Yosemite National Park,taking it over from Delaware North Corp….but when I began reading into the comments being written,maybe some are right about Yosemite….One or two people making comments on the… Read more »

Silly; groundless Republican propaganda that only the gullible or like minded will accept as fact.

wagonrd….P.S……ANOTHER clearing-up of your blanket-statement stating “National Parks are closed to dogs”……not true…most National Parks allow dogs on trails, including Yosemite and other near-by National Parks…with restrictions on certain trails,probably those with heavy foot-use and family-friendly easy access trails….not ALL trails,and certainly not closed to people that happen to own… Read more »

Before anybody gets disappointed when they arrive in Yosemite and expect to be able to walk any trails with their dog(s), be advised that Low-inyo’s information above is very wrong. There are a FEW places where you can have a dog on leash in Yosemite, but they are very few.… Read more »

I was just walking around Bodie (State Park) with my dog. There were at least three other dogs too and the rangers said nothing. Come to think of it, I’ve had a dog in tow at a number of other state parks along the coast with zero problems from employees.… Read more »

Joe….Do you mean your trying to tell us our NPS and Government AREN’T trying to take our rights away by not allowing dogs in Bodie ? ….what ?……Actually,what you say is very true….I’ve been to Bodie State Park with my Cocker Spaniol named “Chloeno” a couple times without a problem… Read more »

wagonrd…..Think your being sarcastic there,but if not,NO ONE is talking about closing all public land to everyone.(again,FOX NEWS talk,but not the truth)…..just trying to protect the few remaining true Wilderness areas from the ORV’ers destructive,abusive,trashy,me,me,me and no one else matters,man or animal, attitude and nature…..which isn’t “a few” of them,but… Read more »

It’s always the few who abuse the priviledge of using public land who, by their actions, force closure to the many. Every where you go there will be a motorcycle rut going straight up a hill, campsites will be littered with trash and trailer holding tanks dumped on the ground.… Read more »

The forest service is designating wilderness areas, not taking them away from anyone. If you look at the maps, you’ll see that the areas designated have few if any roads and are characterized by lack of development. Roads are not being removed here..and there are several roads that are carved… Read more »

I think we could use fewer people on the planet. However that happens it will be messy. As for Agenda 21 — it’s little more than an academic exercise: https://en.wikipedia.org/wiki/Agenda_21 Agenda 21 is a non-binding, voluntarily implemented action plan of the United Nations with regard to sustainable development.[1] It is… Read more »

“Agenda 21” what’s next, Depopulation with the looming IranWar, China(Sprattly Islands War) american kids will be shipped off to be blood sacrificed in the Wars, All so the Elite can get more and more power and Control “Never Let a Good Crisis go to waste” Hahahaha

It is the goal of the conservationists to make it a felony to drive off the pavement. They have been successful in this endeavor and will never cease. But, that’s OK, we hikers can trek in the fringes of the wilderness, and there’s akways the Mall

wagonrd…What you say might be seen on FOX NEWS and friends,but it’s FAR from the truth.No organization wants or demands no driving on the designated dirt roads.The problem is most ORV’ers NOT wanting to stay on the already-there passages and roads.And as far as “hiking on the fringes of the… Read more »

Does making an area wilderness impact what hunting can be done in that area? Lets hear what some local hunters think about these area designations. I think hunters use these areas more than anyone. IMO making roadless areas wilderness is not a problem as long as it in no way… Read more »

Sean….Closing areas to ORV destruction IMPROVES the hunting areas,unless your one of the lazy “hunters” that like to drive around looking for their game.If you hunt the old-fashion way,and the way hunting is supposed to be…on foot,without a vehicle and a 12 pack of Bud,hunters should love having their hunting… Read more »

@Low-Inyo – So you can hunt in wilderness areas? What exactly do you hunt? How do you pack out your meat?

Sean…I’m no longer a hunter,but when I was,even though I had access to dirt roads,I didn’t ORV into the area….or out.1986 bagged a deer behind Volcanic Butte near Devil’s Gate north of Bridgeport and packed it out….the way your supposed to do it,unless you got a horse to help out,which… Read more »

Hunting has been a continual process in “the wilderness” in this region for over 12,000 years. For the first 11,850 years without motorized vehicles.

Sean- I hunt wilderness areas mostly in Wyoming but have several times here on the east side. In Wyoming I use pack stock to haul everything in and out. For an elk this is necessary because unlike a deer, elk would require lots of trips in and out on foot… Read more »

Too bad the few always ruin it for the rest of us, always have, always will. In this case its, I think, its SOME of those (meatheads) in their monster trucks and motorcycles having no respect for the damage they do to the land.

Tinner, this isn’t about the OHV meatheads, as they wouldn’t be able to find these wilderness areas on an engraved map. Monster trucks usually don’t venture far from the camp cooler and are prone to breaking down in remote areas. Any motorcyclists passing through are locals with the knowledge and… Read more »

I have lived in the Owens valley all my life. I went to the roadless meeting a few years ago trying to stop the friends of the inyo from taking all the roads out of our public lands. It’s funny they call them public lands but if you are not… Read more »

Wilderness is a precious resource regardless of one’s ability to hike in. Emphysema is a terrible condition, but often a result of a poor life choice: smoking. If we make everything available to everyone who have made a poor life choices, there would be little left for those of us… Read more »

with in reason
Reply to  Neighborhood Snitch

hey snitch, You are kidding yes! So with your thinking we should but this guys father in a pasture and forget about him. The FS as well as the wilderness folks are taking the wilderness too far in this region. They keep taking more land. before you know it wilderness… Read more »

God for bid that something does not happen to you so you can’t walk. Maybe you could feel for people that can’t no matter what caused there inability to be able the hije in to public land that is only public to folks that can walk.

Josh Rhodes…..In such a case there should be exceptions made for them and their families…kinda like handicap stickers in vehicle windows…but problem is,if Wilderness areas aren’t designated to protect the land and wildlife,the ones that abuse the most will find ways to get their feet in the door,much like with… Read more »

Thanks Josh for trying. It is hard to compete when the road closers are paid (by tax dollars) to go out and persuade the USFS to close it off. Because the lands are public no one cares about the locals who chose to live here or those with mobility issues.… Read more »

Who will be the first to say not only is the current administration trying to take EVERYONES guns away,but now also trying to take all the forest land away too.

No me, designating land as wilderness is an excellent way to protect it.

However guns are the best why to protect your home.