By News Staff on September 7, 2014 in Government Agencies/Utilities

Meadow (37 42.738 x 119 30.541 – Mariposa Co., 7,870’, August 16) A fire, that may be a spot fire, from the Meadow lightning-caused fire, was discovered at approximately 12:30 PM, Sunday, September 7. The fire is burning in Yosemite Wilderness, and is approximately 2,582 acres.  It is burning within the Little Yosemite Valley (LYV) area on both sides of the Merced River.  All trails in the area are closed.  Approximately 100 hikers and backpackers were evacuated from the fire area in LYV.  The High Sierra Camps were seasonally closed today.

Eighty-five hikers and climbers were also evacuated from the summit of Half Dome by helicopters from the California Highway Patrol, Department of Agriculture Forest Service, Sequoia Kings Canyon National Park, and CAL Fire.

The South Central Sierra Interagency Management Team will begin management of the fire at 6 PM, September 8, 2014.

Over 100 firefighters are assigned, including Yosemite fire crews and 6 Hot Shot crews

Nevada falls east through LYV along the Merced River corridor.

Fires of this magnitude, in this area of the park have in the past produce heavy smoke that drains down into Yosemite Valley, so be prepared for smoke in the Unhealthy  HYPERLINK “http://www.epa.gov/airnow/aqi_brochure_02_14.pdf” AQI range or worse in the mornings, with some clearing in the afternoon hours.

As with any fire incident in Yosemite National Park, firefighter and public safety is our number one priority. We appreciate everyone’s assistance with this priority.

Good afternoon: We are receiving numerous calls regarding a smoke column seen from the Crowley Lake/Mammoth Lakes area. This is the Meadow Fire in Yosemite National Park. Our Inyo Hotshots responding along with other resources. Here is a photo shared from a Crowley resident. We will share information as we get it. 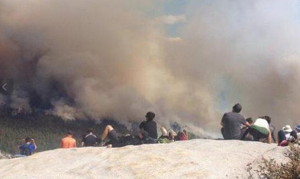 Just a quick update: Yosemite is reporting a fire, but not necessarily the Meadow Fire. See this link. I want to try to make my information as good as possible.

We work to provide daily news to all of the Eastern Sierra, in the tradition of Eastern Sierra News Service and the Sierra Wave. We bring you daily happenings, local politics, crime, government dealings and fun stuff. Please contact us.
View all posts by News Staff →
Inyo-Mono farmers markets
CHP says safety gear minimized injuries of motorcyclist