By News Staff on February 20, 2013 in Government Agencies/Utilities 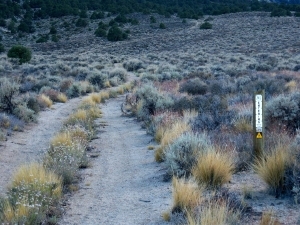 Sierra Wave Media heard several times from citizens that they believed the Forest Service would close 480 more roads. Asked specifically about that figure, Hornick said, “We are not closing anything in addition to what was closed under the earlier Travel Management Plan. Hornick said that currently there are three projects proposed to deal with roads closed in 2009.

He said the Forest Service has or will disguise or barricade these roads. He said crews have or will go out to every single route to also see if some of these roads should be opened. He said that so far three additional miles or ten routes will be re-opened. Hornick said, “There are a few small segments closing but we are opening many more based on field reviews.” He repeated that there are no additional closures.

Hornick admitted that he knows some people have misunderstood the intent of the current projects. Feelings do run high over Forest policies to close routes. In fact, some have ripped out barriers placed on closed roads. As more than one resident has said privately, “The Forest Service approach to road closure is terrible.”

Again, the projects about to take place now, according to Mr. Hornick, are about naturalizing already closed roads. More will apparently be discussed about these projects at a meeting of the Mono County Collaborative Planning Team next Thursday, February 28th at 9am at the Town/County Conference Room in Mammoth Lakes at the Minaret Village Mall.

I kind of hope if sequestration goes through they will quit wasting tax money trying to hide closed roads. What a waste of time and money while the country is supposed to be hurting

On with the Sagebrush Rebellion!!!!!

The Forest has no business rehabbing ANY inappropriately closed roads in “Inventoried Roadless Areas” which make up 1/3 of the Inyo. The IRA issue is a debacle that the Forest knows all to well should never have resulted in so many closures! Ask any Forest rep to explain IRA to… Read more »

People don’t need 10 ways to get to the same place….if they close 7 out of 10 of roads going to the same place, I’m fine with it….I just wish USFS would enforce the rules…I’m sick and tired of dirt bikers rutting up single track paths that they aren’t suppose… Read more »

I’m a avid dirtbiker. We’re headed out in a few hours for the weekend.

I’ll be sure to tear out a few road closed signs while I’m out there.

Mark, I think the article clearly states that they are not closing more, but have re opened some trails. I wonder did you take the time to read the whole article or just read part of it .. like the headline. And open access people wonder why we get ragged… Read more »

What a weekend! Found a equestrian trail ride going on in our legal ORV area this weekend. I have to question why they would have a trail ride in a popular ORV area on a Saturday? Especially when they can literally ride anywhere else they want. Then they failed to… Read more »

I went to the meeting last night and learned, unexpectedly I must add, that in the Coyote area alone the USFS will be opening approximately 7.1 miles of previously closed roads. Of these roads being opened back up 0.9 mile is for public use. 6.2 miles is for permit use… Read more »

I agree with your basic idea Sierragrl, but you kind of contradicted yourself, in saying they don’t need 10 roads to get somewhere, if they close 7 out of the 10, then that is cool. But then you say that it upsets you the moto people rut up your mt.… Read more »

I just want to say thanks to any one that’s trying to keep these roads open. To those who want to protect the dirt, get a life!