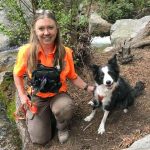 One happy rescue dog and it’s handler. Dogs love having a job!

It doesn’t take a whole lot of convincing that dogs are, in fact, “man’s (humankind’s) best friend.”

The Inyo County Sheriff Facebook page shared some photos of the teams currently being sent into the earthquake rock-slide areas to assess the damage and safety of trails and campsites before allowing hikers, climbers and campers back into the affected areas such as Mt. Whitney. 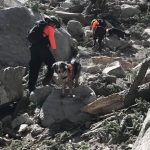 Rescue dog and handler working their way through a debris field.

The U.S. Forest Service already has teams working their way through the areas affected by Wednesday’s 5.8 magnitude earthquake in the Lone Pine area. They are looking for any possible campers and hikers that may have possibly been injured…or worse, and to check for the stability of the mountainside.

The last thing the forest service wants to happen is to “reopen” trails and campgrounds in an unstable rock slide area, especially considering the numerous aftershocks that often occur after an earthquake which can further destabilize an area and send huge rocks hurtling down. 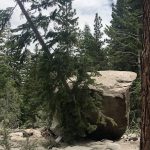 If you have seen pictures of just how “big” some of these rocks are, then you know why it’s not a good idea to be in their path.

Rock-slides, especially huge boulders, can take out some very large trees, much less a human body, so unless you are Superman or Superwomen, don’t tempt fate! Only return to the wilderness areas currently affected by Wednesday’s earthquake when the forest service says that it is safe.

Be thankful that we have the dedicated men and women of the USFS, other rescue groups AND, yes, their rescue dogs, to make things safer for all of us that enjoy the great outdoors! Dogs Rule!